No Minarets and Islam for Switzerland, Please

57.5 percent of Swiss residents voted to ban the construction of minarets in Switzerland on November 29. Adversaries of the ban say that such measures may affect the nation’s economy and its ties with the Muslim world. The initiators of the referendum plan to ban forced marriage and the wearing of cloaks among Muslims. 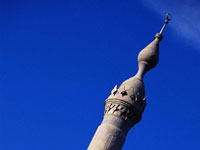 No Minarets and Islam for Switzerland, Please

The project was proposed by the Swiss People’s Party (SVP), which has the largest faction in the parliament of the country. It took party members 18 months to collect the required number of signatures: the referendum took place only after 100,000 signatures were collected.

A message posted on the official website of the Swiss government says that the government respected the opinion expressed by the majority of Swiss residents and therefore banned the construction of minarets in the country. The decision passed as a result of the national referendum will be added to the Constitution of Switzerland too.

Switzerland has a 8-million-strong population, of which approximately 400,000 people practice Islam. There are only four minarets in the country’s mosques.

The results of the referendum show that the Swiss preferred not to follow recommendations from the government. The referendum proved that the population of the country was highly concerned about the growing number of migrants and the growing influence of Islam in the country, local mass media say.

SVP members and their followers say that minarets symbolize Shariah ideology, which can not be accepted in the Swiss society, Tribune de Geneve wrote. Official spokespeople for the party already said that the Swiss nation wanted to have neither minarets, nor Shariah laws in the country.

SVP’s campaign became quite a controversy both inside and outside Switzerland. Many people were concerned about the posters, which the party used to advertise the upcoming referendum. One of the posters depicted a woman in black overall against the background of black minarets and a Swiss flag. The slogan on the poster was saying: “Stop!” The posters were banned in a number of Swiss cantons.

SVP is not going to stop. The party intends to ban forced marriages and Muslim cloaks in the country.

Officials representing the Swiss government have already stated that the ban on the construction of minarets in Switzerland will not affect the construction of mosques. The results of the referendum do not reject the Muslim community, religion and culture, officials said.

Minarets are generally tall spires with onion-shaped or conical crowns, usually either free standing or taller than any associated support structure. As well as providing a visual cue to a Muslim community, the main function of the minaret is to provide a vantage point from which the call to prayer (adhan) is made. Call to prayer in Islam happens five times each day. These times are at sunrise, noon, day, sundown, and evening. In most modern mosques, the adhan is called not from the minaret but from the musallah, or prayer hall, via a microphone and speaker system.

Officials representing Islamic organizations of Switzerland stated that they were very surprised with the referendum. They claimed that Switzerland should be ashamed of the recent decision since the situation with Islam in the European country was always an example for other countries of the continent.

Officials representing other parties in Switzerland claimed that they would challenge the results of the referendum at the European Court of Human Rights. Numerous human rights organization claimed that the Swiss referendum violated freedom of religion and was a discrimination on racial and religious affiliation.

Many analysts say that the relations between Switzerland and Arab states will soon worsen because of the scandal. For instance, many Muslim states may boycott Swiss goods. The Swiss authorities are concerned about such a possibility too: the export of Swiss goods to Muslim states brings up to $14.4 billion of profit to the country a year.