Massive dog bites off half of little girl's face

The police of the town of Voskresenk, the Moscow region, are investigating the tragic accident, which shocked the whole town. A massive dog attacked and mauled a 12-year-girl several days ago. The owner of the dog was standing nearby, just watching it all happening in front of his very eyes. The dog disfigured a half of the little girl's face. Doctors managed to save the child's life, but her face can only be reconstructed through very expensive plastic surgery. The schoolgirl's parents can not afford the operations, whereas the dog owner does not even offer his help, Vesti reports. 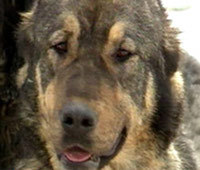 Lera Volkova, a girl of 12 years old, was coming back home from school last Saturday. The girl did not appear home at her usual time. The parents were later informed that a dog had attacked their daughter near the vet clinic on Sovetskaya Street.

"The dog knocked her down. She turned her head to the left, and the dog mauled the left part of her face," the girl's grandmother said.

The dog, an adult Central Asian sheepdog, also known as the Turkmen wolf dog, weighs nearly 50 kilos. It was not hard for the dog to knock the girl down. Her friends could not do anything to protect the girl.

"Lera covered her face with her hands, but the dog started biting her hands. The owner was standing nearby, just watching," Ludmila Revina, one of the girl's friends said.

Having seen the blood, the dog owner, Alexander Kotenko, 36, pulled the dog away. "He pulled the dog away and put it in the car. Afterwards, he came up and lit a cigarette," eyewitnesses told the Komsomolskaya Pravda newspaper. "He did not even try to help the girl raise to her feet. He did not ask her how she was either," an eyewitness said.

Some time later, the man got into his car and left. A passerby saw the girl on the ground. The man took the bleeding child in his arms and took her to the vet clinic (the clinic was the closest medical institution). Vet specialists provided first aid to the little girl.

"That dog has an ill reputation. It's a three-year-old male. We were supposed to make him an injection against rabies, but he did not reach the clinic that day. We've examined the dog before, and, to tell you the truth, we were afraid of it. It was scary to approach the animal at times. He is a very inadequate dog. We recommended the owner to take canine courses to train his pet, although to no avail," a vet specialist of the clinic said.

The victim was taken to the hospital, where doctors said that the dog had virtually bitten off the child's left cheek. The girl has already received plastic surgery in the city of Kolomna. "The operation went successfully, the patient is in stable condition," a doctor told RIA Novosti news agency.

The girl is still unable to speak. She receives food through a tube. Doctors say that she would need to have at least two or three operations. Plastic surgery is very expensive, whereas Lera comes from a poor family. Lera is raised by her mother. The girl has a sister (18 months) and a brother (16 y.o.). Her mother works as a sales assistant. Her father was killed several years ago, the Moskovsky Komsolomets reports.

Officials with the department of Russia's Interior Ministry for the Moscow region believe that the dog owner is partially guilty of what happened to the child.

"The man took the dog out of the car and did not take any safety measures as he was taking the animal to the vet clinic. We instituted a criminal case against him in accordance with Article 118 of the Penal Code of the Russian Federation - "Causing severe bodily harm by inadvertency"," the official said.

The specialists, who are familiar with Central Asian sheepdogs, were bewildered with the story that took place in Voskresensk. "This dog does not attack people out of the blue. This is not typical for the breed - these dogs are raised to protect people," Dmitry Yuriev, a cynologist, said. "Unlike fight dogs, the Central Asian sheepdog is not aggressive against humans and other animals. Healthy adult dogs of this breed are balanced and quiet," he added.

The dog owner may face the maximum prison term of only up to six months. The man called the girl's relatives only once. "He wondered if we needed any help. I told him: "What kind of help do you think we need if we do not see a half of the child's face?" the girl's grandmother said.