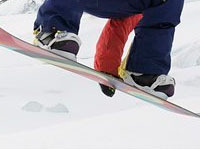 Denis Udovenko, a resident of Vladivostok, a city in Russia's Far East, ordered a second pair of prosthetic limbs to be able to do snowboarding. The man lost both of his forearms in a shark attack in the middle of August in Russia's Primorye region.

At the end of October, the young man flew to Germany, where he received neural prosthetic limbs.

"Denis and his wife Polina go to the clinic every day for exercises. The process is going well. Denis has recently decided to order a second pair of simpler prosthetic limbs for sports activities, particularly winter sports," the man's father said.

Denis has recently found out about the existence of stronger prosthetic devices designed especially for sports activities, Prima Media reports. Denis goes in for snowboarding and he does not want to bid farewell to his favorite sport because of the injuries. The man's father said that it would be easier for his son to get used to the new devices because they are much less functional than those which Denis works with now.

Denis can already eat and drink with the help of the artificial forearms, Komsomolskaya Pravda reports. He is going back to Vladivostok in the middle of December.

It goes without saying that such prosthetic devices are very expensive. They cost nearly 5 million rubles ($167,000). Two million rubles of the amount were assigned by the government of Sakhalin, where the man was born. It became possible to collect the remaining amount with the help of donations received from those people who did not remain indifferent to the young man's tragedy.

The administration of the Primorye region paid for the plane tickets and accommodation in Germany. More than 2 million rubles were received from the foundation of Mikhail Prokhorov, a well-known Russian billionaire.

A great white shark attacked Denis Udovenko in Telyakovsky Harbor on August 17. The shark bit off the man's forearms and seriously injured his leg. The man received two muscle-restoration surgeries in Seoul, the Rossiiskaya Gazeta wrote.