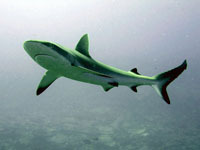 A second shark attack occurred in Russia's Far East within only one week, officials of Russia's EMERCOM said. The first attack took place on August 17. A shark of an as yet unknown species attacked a man on the coast of the Primorye region. The shark seriously mauled the 25-year-old man and bit off both his arms up to the elbow. The man was hospitalized in a critical condition, but medics said that his life was out of danger. Such incidents are extremely rare for the region.

A second incident took place the next day, on August 18. The shark attacked a 16-year-old teenager. The young man suffered serious lacerated wounds of the hip. The boy was hospitalized in Vladivostok.

The predator attacked the boy, named only as Ilya, near Zheltukhin island, in the south of Peter the Great Bay. This place is not very far from the location of the previous incident.

Those became the first shark attack incidents in the Primorye region (Far East) of Russia. Specialists say that both attacks were made by one and the same shark. Scientists are now trying to find out which shark species could swim to the beaches of Primorye. Some specialists say that it could be a Great White.

Eyewitnesses say that the shark was four meters long, had a barrel-like body and large fins. Biologists say that the appearances of Great Whites in Primorye were registered before, although they had never attacked people.

Scientists from the Far Eastern Department of the Russian Academy of Sciences say that sharks may have appeared near the south coast of Primorye at the end of summer because of a typhoon and a warm current. Alexander Sokolovsky, a Candidate of Biological Sciences, said that sharks appear in the waters near Cape Gamov in the middle of August and in the beginning of September every year, when the water is the warmest there.

"After a typhoon, the waters here become even better for sharks. The sharks are very sensitive to ecology, but the water here is clear, and there is a national park on the coast," the scientist said. "They come here for food. When there is a shortage of their common food - fish and squid - they swim here searching for bigger food - seals, for example. Maybe the shark took those two people for seals," the scientist said.

Sokolovsky added, however, that it was the first incident of shark attacks in the south of Primorye in 51 years of his work experience.