Boys and girls abolished in Sweden 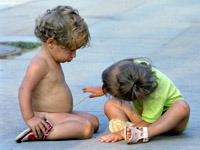 The category of gender was canceled at one of Swedish kindergartens. The words "boy" and "girl" are no longer used there, while pronouns "he" and "she" were replaced with "it". Kindergarten teachers believe that they are successfully breaking the gender stereotypes so that the people of two sexes would not feel predominant towards each other. Experts say, though, that such seeming equality may lead to the genetic rebirth of the population and to the decline of human civilization.

The bizarre mission is taking place in the Swedish preschool called "Egalia." In this kindergarten, pronouns 'han' (he) and 'hon' (she) were replaced with genderless 'hen'.

"We use the word "Hen" for example when a doctor, police, electrician or plumber or such is coming to the kindergarten," said school director Lotta Rajalin (52). "We don't know if it's a he or a she so we just say 'Hen is coming around 2pm.' Then the children can imagine both a man or a woman. This widens their view."

The Swedish teachers of "Egalia" are widening the children's view in a very strange way. For example, fairy-tales about Cinderella and Snow White are no longer allowed at that school. The teachers apparently believe that such stories tell children what gender inequality may lead to. Instead, they read books about two male giraffes who were very concerned about their inability to become parents until they found an abandoned crocodile egg. All other books at school are about same-sex families, single parents and orphans.

The director says that such books have been chosen to raise tolerance to homosexual and trans-gender individuals with children. There is nothing bad about about such a wish, of course, but why do they have to do it with the help of a completely different model of behavior? Do they want to make children believe that same-sex unions are more natural than unions between males and females?

It seems that the ardent followers of the idea of political correctness want to abolish cultural, religious, racial and even sexual differences between human beings.

A story that took place in Canada has received a lot of attention of Russian and Western media recently. A Canadian couple decided not to unveil the sex of their child until the child decides for itself whether he/she wants to be a man or a woman. The father of the child said that parents choose too much for their children. The mother of the child added that she didn't want to unveil the sex of her child because it would be up for the child to decide whom he (or she?) would like to eventually be.

The naïve couple assumes for some reason that they can perform the function of Nature if they say that the sexual identification of their baby depends on their choice. If it really were like that, we all would be born the same. Primary sexual characters are not really important. There are serious psycho-emotional differences in the development of boys and girls. It would be silly and even very dangerous to deny that.

Vladimir Bazarny, a Russian scientist, a Doctor of Medical Sciences, believes that the widely popular genderless upbringing of children has led to the appearance of so many feminine men and masculine women. Bazarny takes the notion of genderless upbringing as a very broad phenomenon. According to him, it includes the mixed education of boys and girls at modern schools. The scientist believes that the children of different sexes must be educated at same schools, albeit in parallel classes.

Girls develop faster than boys. When they stay in one group, girls, being genetically and spiritually older, always suppress boys. The majority of teachers are women, so it just so happens that boys are forced to take the female model as behavior as the more correct one, the scientist said. All manifestations of the male model of behavior are therefore suppressed.

This intrusion of the alien behavioral stereotype affects the psyche of the children very seriously. As a result, boys suffer from gender self-identification disorder. They develop the feeling of inadequacy and impairment, they become highly suspicious, lose the ability to overcome difficulties and show less social initiative. Masculinity gives way to aggression, and creation gives way to destruction.

Women very often say that it is so hard to find a real man, that they have to do everything themselves. Such complaints are based on very serous reasons.

"Society expects girls to be girlie, nice and pretty and boys to be manly, rough and outgoing. Egalia gives them a fantastic opportunity to be whoever they want to be," said Jenny Johnsson, a teacher at the above-mentioned Swedish school said.

The perverted perception of the notion of gender equality may eventually destroy the borders between the sexes. It just seems insane that it will be hard for an individual to understand, whether they are a woman or a man. Will such people be able to build strong and long relationships and raise children?