Earth's population to amount to 7 billion in November 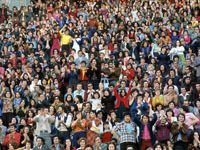 In November, the Earth's population will amount to seven billion people. This forecast was made by Secretary General of the United Nations Ban Ki-moon. Naturally, the exact date of this momentous event cannot be predicted, but October 31 is considered the official date.  The main growth of the global population occurs due to the developing countries. This day has been determined by the UN Population Fund that is preparing a series of events dedicated to this historic event. According to forecasts, in 2011 the Earth will have approximately 135 million new people, and 57 million will die.

Some fifty years ago there were only 3.5 billion people on the planet. The total world population has doubled over the period shorter than the current average life expectancy. The reason for the exponential growth of the population is the so-called demographic transition - the process whereby a society with high fertility and high mortality transforms into a society with low fertility and low mortality.  According to the UN, the largest number of people lives in China (1.35 billion), followed by India (1.24 billion). This is the first time when the top ten includes only three developed countries: USA, Russia and Japan. As suggested by Harvard demographer David Bloom, within the next 40 years the population growth will be over two billion people to reach nine billion.

The demographer stated in the Science journal that the majority will be brought by the African countries. However, seven billion people consume resources at a rate that does not leave the nature enough time to recover them. This is one of the main problems of overpopulation. No ocean cities and the development of underground areas often portrayed as a technological alternative to the Malthusian views would solve this fundamental problem.

This year, the so-called "Ecological Debt Day" occurred last week. The "Ecological Debt Day" is named by the organization Global Footprint Network (GFN) each year. This is the moment when humanity has consumed more resources than our planet can make up for the year. The trend shows that since 2001, each year the debt day occurs three days earlier than in the previous year.

As predicted by the Population Division of the Department of Economic and Social Affairs, by 2100, the number of inhabitants of Earth could exceed $10 billion. Some experts predicted that this number can be reached by mid-century. However, many experts talk about the inevitable slowing of population growth and the beginning of a reverse process.

We are now dealing with a resonance when the possibilities of modern medicine have become available to traditional societies. Fertility in these societies will remain at the same level for some time. Subsequently, however, due to the distribution of contraceptives particular economic conditions in the form of the pension system, it will begin to decline sharply.  The census shows that the population of many countries is reduced due to low fertility. Russia is among them. "The experience of nearly all Western European countries shows that once an immigrant from a country with a high birth rate arrives in a country like Russia or France, where fertility trends are very similar, in the second generation the birth rate is reduced two- or threefold.

There are corresponding calculations by the Department of Sociology, Family and Demography at Moscow State University. According to them, even when in 2050 Russia accepts up to 60 million migrants, in any case, the total Russian population will decrease to 80 million. It will be mainly composed of the descendants of migrants who will have even lower birth rate than the locals have today," said the director of the Institute of Population Studies, Igor Beloborodov in an extensive interview with "Fontanka."

This means that the claims that the influx of immigrants is helping to solve the demographic problems of Russia are groundless. Attracting migrants, the Russian government only solves the issues of the Asian regimes at the expense of its own people.

Historical experience suggests that a solution would be standard - a military conflict. There are plenty of reasons for it, including in former Soviet Central Asia. Yet, FMS leaders believe that labor immigration to Russia from abroad should be increased.