Victims of adoption: Saved and forgotten 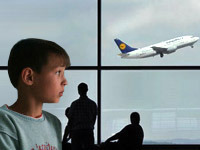 Artyom Saveliev, Denis Khokhryakov, Sandra Zarubina... The stories of those children, who had been abandoned by their foster parents in the West and returned home to Russia, received extensive media coverage in Russia. However, a few may recollect the names of those children now. How did the children settle down in their homeland? Do they want to go back to the West, which never became their home?

Denis Khokhryakov, 13, used to live in an orphanage in the Volgograd region. The new parents took the boy to the Dominican Republic. Employees of the orphanage believed that the boy was just fine in the new country. In 2008, the little boy was found in an orphanage of his new exotic home.

The boy found himself in the Dominican orphanage in 2005, after his foster parents left him in one of Dominican families. The new parents also refused from Denis. Last year, Denis returned to Russia. His sad story could be heard on every TV and radio channel in the country. Everybody was sorry for the poor boy, but then, as it usually happens, everyone simply forgot about him.

A similar story took place to Artyom Saveliev. His US foster mother put the boy in a plane and just sent him back to Russia as a bad purchase that did not fit. The woman only wrote the note in which she said that she no longer wanted to raise the child.

The two stories triggered international scandals that subsided very quickly. News agencies only said that Artyom Saveliev would be delivered to a new family. As for Denis, it was reported that the boy was very unhappy about his return to Russia. The boy reportedly wanted to go back to the Dominican Republic.

In actual fact, the two boys are now living in Moscow orphanages. Both of them learned Russian and enjoy communication with their peers. Artyom was having a very busy life during a year of his stay in Moscow. He went to school and learned to ride a bicycle and to roller-skate. "We call him the Sunny Boy." He is very polite and affectionate," the boy's tutors said.

Denis is currently staying in the social orphan asylum for children and teenagers. "He is very sociable. We all communicate with him, just all of us. He is on good terms with older boys and girls too," a pupil of the asylum said.

Sandra Zarubina became another child who attracted a lot of media attention. The girl was taken away from her Portuguese foster parents and delivered to her Russian mother Natalia. The Portuguese parents did not do any harm to the girl. Her own mother had more rights for the girl in spite of the fact that the woman had previously abandoned her child.

Sandra was born in April 2003 in Portugal. Her mother came to the country for earnings. When the girl turned 18 months, social agencies delivered the girl to Portuguese couple Joao Pinheiro and Florinda Vieira. A court of Barcelos approved the decision because Natalia was accused of prostitution and alcoholism. In 2007, the woman was deported from Portugal because she had no rights to stay in the country. Zarubina refused to leave without her daughter and took a legal action. Surprisingly, the court took the side of the Russian citizen.

The woman and her daughter returned to Russia triumphantly. When it became known that Natalia was not a very good parent, many thought that it would have probably been better to leave Sandra in Portugal.

The girl still lives in Russia. She lives with her family in the Yaroslavl region. She goes to school and has many friends. The girl learned to speak Russian and became a straight-A student at school. She says that she does not miss Portugal. "It was boring there," she told MK newspaper.