Banning hijab may result in Jihad 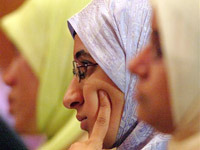 The law of Allah and mercy for Muslims women - this is the way a hijab is called within Islam. Muslim believers today say that it gives them a sense of protection from the aggression of the world. Yet, what is the mercy for Muslim women is a threat to human rights and international security for some politicians. In some European countries a hijab may cause jail time.

Baku police stopped a protest rally of the public association "Juma" in front of the Ministry of Education. Members of the association, mainly Muslim women, wanted a simple right for their sisters and daughters, the right to wear headscarves in schools.

The crescent on the flag of Azerbaijan does not mean that in this country everyone has to live under the sharia law. Under the constitution, Azerbaijan is a secular state, just like Russia. However, if in Moscow a young Muslim woman has the right to wear hijab, in Baku this is not the case.

At the end of November of 2010, the Education Ministry has introduced a final ban on the hijab in schools. The Ministry considered that the Muslim headscarf is not a part of the school uniform. Azerbaijani believers called the ban a direct violation of human rights. Since November 2010, numerous protests against the discriminatory regulations have been held in Baku. During one of the recent ones, on May 6 of this year, the police dispersed the demonstrators with batons. Dozens of protesters, many of them women, were beaten and detained. It is worth noting that no Muslim organizations were involved in this rally. The May protest was not announced in any media outlets. The rally was held by ordinary women standing up for their right to wear the hijab - the Azerbaijani, followers of Islam. It turns out that the police used force against those who, in theory, it should have been protecting. Azeri Muslim organizations and human rights associations stood up in defense of the protesters who were beaten.

Misir Mardanov, Minister of Education of the Republic, believes that the dispersal was the right measure. The minister said that the ban on the hijab was not a personal initiative of his office, but a state policy. The Ministry of Education, as a law-abiding agency, is obliged to stick to this line. The ban on the hijab in school is normal. When a girl leaves school, she can put her handkerchief on and then wear it anywhere. When in school, she is obliged to follow the rules. As for the defenders of the hijab who gathered nearly every month in front of the Ministry of Education, they are clearly not advocating for it. It is not ruled out that these are the conspiratorial agents of the international terrorism. "Certain forces, both domestically and abroad, try to use the theme of the hijab in the educational institutions of Azerbaijan for their own purposes," said Minister to the Information Agency "Novosti - Azerbaijan." The Minister believes that the statements about the violation of the rights of the believers are provocative, as in Azerbaijan the rights and freedoms of believers are fully respected, including in terms of wearing religious clothing.

The activists say that the Minister, talking about respecting the rights of believers in the country, has distorted the facts. One cannot wear the hijab not only in schools. Not wearing it for Muslim women is worse than prison. Speaking of prisons: in France, women face imprisonment for wearing the Muslim scarf in public. A hijab on the subway, in a store or just in a yard in France is considered a threat to the French democratic values - in other words, ideological terrorism. Italy also supported the French initiative. The echo of the European war on the hijab could be heard in Asia. In Turkey, some activists of pro-Western parties attack Muslim women with scarves on their heads. Hijabs are publicly burned on the Turkish streets. Rectors of some institutions no longer allow attending classes even to those students who wear the hijab outside only and take it off at the entrance to the Alma Mater. Turkish universities asked those who wore hats with veils instead of headscarves to leave. The same thing is happening now in Azerbaijan.

Why is this happening? Chairman of the Islamic Committee of Russia Heydar Jemal believes that the reason is the "gray cardinal" of the West: "For the West, Islam and Orthodox Christianity are enemies, and the West is trying to find holes out there and start shaking the foundations. For the secret service it does not matter whether the propaganda is Catholic or Baptist. The main thing is the very disintegration of civilization." According to the expert, the split usually starts at the top. "In Azerbaijan this is the case, many politicians now want to fit into the western format. This is happening in secret. A representative of the Azerbaijani elite continues to position himself as a traditionalist, but the media discovers that this man secretly went to the West and got baptized secretly and even joined a Masonic lodge. In the case of the elites that goes hand in hand", said Jamal to Pravda.ru.

This is the case with the elites, and on the bottom, according to the believers, the real persecution of the Muslim head covering is ongoing. Women here do not face prison for putting a hijab on, but this required piece of clothing can bring a lot of problems to Muslim women.

Humat Hajiyev, a human rights activist with the "Centre for the Protection of freedom of religion and conscience" (DEVAMM), described some of them.

Humzat says it all started when the hijab was banned in passport photos. Many Muslim women then refused to get a passport. Undocumented women in this country have no rights. They cannot get a job, leave the country, and are limited in everything. Without a passport a young mother will not be given her baby in a hospital. Problems arise with Muslim girls as well. If they are seen wearing a hijab in a local school, they may be expelled, even if they are straight A-students. Many parents try to transfer their daughters to other schools, but the story repeats itself. The problem could be solved by the existing Muslim schools, but the number of seats is limited. Many of them are just going through the phase of development and currently cannot provide proper education. Eldar Sultanov, a lawyer with the DEVAMM, says that disparaging women for wearing a hijab is unlawful and violates the rights of the believers.

Muslims, of course, can avoid all the problems associated with the hijab but simply not wearing it in public. It would be justified not only by following the laws of the country but also security considerations. However, this is European mentality. Muslims think a little differently. For them, removing the hijab is not a security measure, but a compromise with conscience.

Leila Bahadori wrote in her article "Hijab - complete surrender" (islam.ru): "The hijab gives women a sense of security. It is a fact known to everyone who wears it." Leila said that the hijab was a veil of Allah. A woman who is completely obedient to Allah in return for her will receives mercy of God.

And not only that: "In Moscow, wearing Shariah-compliant clothes, at first I paid much attention to the fact that men stopped looking at me with the eyes of anxious males, and began showing care and protection. They held heavy doors in the Metro for me, gave me a seat in public transportation, rushed to help if I dropped a bag. And there are many examples. It was funny to me and I would share with my family: "Apparently, they believe that Muslims are weak creatures, not capable of taking care of themselves." Yes, they do ... and the best of them rush to the rescue. Security. Is not it what a woman needs?" You may agree or disagree with Leila, but this is the point of view of nearly every Muslim.

Hijab for the believers is as mandatory as a prayer and help to the disadvantaged. It suffices to quote one verse of the Quran: "O Prophet! Tell your wives and your daughters and the women of the believers to draw their cloaks (veils) all over their bodies. That will be better, that they should be known (as free respectable women) so as not to be annoyed. And Allâh is Ever Forgiving, Most Merciful. "(33:59).

In Islamic law there is provision that any government is better than chaos. The persecution of the hijab for Muslims is chaos. Some see a bigger issue here. For them, the ban on the hijab is encroaching on Islam. If this happens, Muslims, like all religious people, are obliged to defend their faith. The extreme form of such protection is jihad, an act of faith as a holy war. Muslims do not wish such a turn of events. Radical Islamists, covering themselves with the camouflage of hijab, can once again shed blood of innocent people.