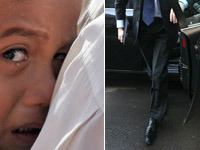 Another Russian woman, who lives in Norway, has addressed to Pravda.Ru for help. Irina Nolund is having a legal dispute with local social services which took away the woman's child. The authorities of Norway claim that the Russian woman is incapable of raising the child. Moreover, they say the woman does not have the maternal instinct. The boy, who is not even two, was transferred to a foster family.

Irina gave birth to her first and only child when she was 42 years old. The woman has had 13 miscarriages before. Her successful pregnancy became the easiest one, which is very surprising. According to Irina, she didn't have any problems at all during the pregnancy. She gave birth to a healthy baby boy. When he turned 14 months, tests showed that the boy was developing very fast: he was eight months ahead of his peers. Social services of Norway took the child away from his mother when he was only 16 months old.

Irina was told during the pretrial hearings that she would be deprived of custody of her child till the boy turns 18 years. She was allowed to see the child only four times a year, for three hours per meeting. The woman was told that if she wanted to see her son more often than ordered, she may cause damage to the child's psyche.

Irina Nolund was not planning to move to Norway. She would often visit Norway before for business to buy goods for a shop in Murmansk - her home city. She met her future husband during one of such visits.

"Our affair was developing very quickly. He was saying that I should move to Norway, that we should get married," Irina said. It turned out later that her husband was unemployed and had a very large debt. He was not paying for his house for almost a year. As it usually happens in Russia, Irina started to solve her husband's problems. She started paying the debt for him.

"I then realized that I was a profitable wife for him. I was 16 years younger, I was independent and I had money," she said.

Irina could speak the Norwegian, so she found a job at a local food store and started working. Her family life did not work, though. The woman left the husband after six years of life. She was fed up with his scandals and extortions. Some time later, she met another man, who became the father of her child.

Some time late, the woman broke up with her common-law husband. Irina started living alone with her child, but she also started having health problems. The woman realized that she would not be able to raise her son alone. She asked child protection services for help.

"I was hoping that they would help me find a baby sitter, at least for several hours a day or for weekends. However, they offered me a place in a kindergarten, which was an hour walk away from my home," she said.

She later learned that the services were supposed to pay taxi bills, although no one told her anything about it. In a state of despair, she took several sleeping pills, but called the ambulance afterwards.

"I explained to the psychologist later that I was not trying to commit suicide. It was a howl of despair. I wanted them to pay attention to my situation," she said.

The woman attracted attention indeed: she was sent to a rehab. Afterwards, she was recommended to undergo a special course in a center for problematic families. If she had not agreed, the services would have taken the child away from her immediately.

"Me and my son were accommodated in a basement near the laundry, which was working 24 hours a day. The child could not sleep because of the noise. My legs were aching, and it was very hard for me to walk up and down the stairs all the time. I was asking for help, but they would decline all my requests," the woman said.

Irina was sent to work at the kitchen. When she said that she could not work there anymore, everyone though that the woman simply did not want to live by local rules. Irina was breaking many rules indeed. She would argue with psychologists about raising children - she was trying to defend her point of view. She though that her opinions meant something. Irina also thought that she would be treated as a mother who was responsible for her son.

"You see, never-ending pressure and control is not the most terrible thing. They don't listen to me at all - this is what's horrible. You are trying to explain something, but they just look at you as if you don't even exist," Irina said.

The assessment report from child protection services said that Irina was incapable of raising her child. The document also said that the woman was mentally unhealthy and could not play with the boy. Aside from that, Irina was shocked to read that she had no maternal instinct.

"I can be accused of having a hyper-instinct. I gave birth to my son at not a very young age and I was cherishing him as much as I could," she said.

"Local child protection services are incredibly powerful in this country. All they say is decisive, even if their statements are not substantiated by medical specialists," Irina said.

Being foster parents is very profitable in Norway. For each child the state pay the allowance between 300-500 thousand krones ($90,000) a year. There is also an additional monthly payment of up to 10,000 krones for clothes, etc. If a child lives for two years with a foster family, no one will be able to return the child to their parents afterwards.

"I know a woman, who had her two children taken away from her. The court in Strasbourg found in her favor, but Norwegian officials said that they could not return the kids to their mother, because the children had been living with foster parents for more than two years," Irina said.

Nowadays, Irina helps other woman to deal with the problems of Norwegian laws. She became a member of public organization called "Women Can". "I will fight for my child till the end." It is frightful to imagine what kind of end it may be.