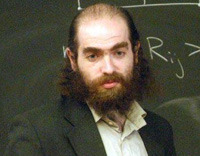 Russian bloggers scrupulously studied the interview of Grigori Perelman, a Russian mathematician from St. Petersburg. Perelman gained global attention after he refused from a million-dollar prize for solving the Poincare conjecture. The bloggers said, however, that Perelman's interview was most likely a fake. Excerpts from the interview were published in the , a nationally popular tabloid.

"There are too many mismatches, contradictory statements and stupidities in the interview. I don't know whether the author simply made it all up, or was it someone who sent the interview to the author. Maybe it was made up by someone who introduced himself as Perelman. I just can't understand how an article like that could appear in one of the nation's mot popular newspapers, because it's clear that it hasn't been verified," a Russian blogger wrote.

Masha Gessen, a journalist, who penned a book about Perelman, also paid attention to contradictions in Grigori Perelman's interview. The journalist found six points at issue, whereas the above-mentioned blogger talks about 13 contradictions. In particular, it seemed strange to the Internet surfer that the brilliant physicist, when speaking about the Biblical story of Jesus Christ walking on water, said that it was a stubborn mathematical problem. The scientist had to calculate the speed, at which Christ was supposed to walk on the water surface not to fall through.

This question, the blogger said, was solved some 200 years ago. Nowadays, such a task can be easily solved by eighth-graders.

"It just seems strange that the mathematician gave an example of a complicated mathematical problem but referred to a regular problem from the school time physics tuition," the blogger said.

Moreover, it seemed "impossible and bizarre" for the blogger that Perelman was speaking about the "Poincare conjecture" in the interview. "He solved the conjecture, so it becomes a theorem," the blogger wrote on his webpage.

"All those thoughts about nanotechnologies and the ideas of filling hollowness look like rabbi's thoughts about pork flavor properties." The critic stressed out that fundamental science prefers to say that all of that does not have applied relevance, which is the point of it all.

Perelman refuses to communicate with the media. The scientist claimed that reporters were not interested in science at all, but were showing much interest in his personal life instead.  In addition, it was said that Perelman does not like Russian journalists calling him Grisha, which is a short for Grigori. This susceptibility also raises suspicion. Perelman usually signs his emails as "Grisha." To crown it all, he signed several of his articles as "Grisha" as well.