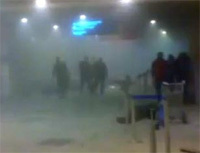 According to most recent information, 35 people have been killed in the explosion at Domodedovo International Airport. The remains of the suicide bomber have been found. The bomb, which the terrorist detonated, was larger and more powerful than usual (1.5-2 kilos for a female and 2.5-3 kilos for a male suicide bomber).

Two terrorists were involved in the suicide bomb attack at Moscow's Domodedovo International Airport that killed 35 and injured up to 180 on Monday, RIA Novosti reports with reference to law-enforcement officials.

Both died in the explosion that ripped through the international arrivals zone at 4:40 p.m. (13:40 GMT), as friends and taxi drivers were meeting arriving passengers.

Eyewitness Artyom Zhilinkov, was there to meet a friend of his arriving from Dusseldorf, could see the terrorist a second before the explosion.

"He blew himself up in front of my very eyes," the young man said. "It was a man, he was wearing a black coat and a black hat - that's all I can remember. He literally blew up into pieces," the man said.

"It was nightmare. The lights went out, the room was filled with black smoke. Many started rushing about, others tried to help the wounded. I used a cart to evacuate two people. There was another guy, but I did  not have the nerve to help him - he did not have his face. There was a lot of blood everywhere. I remember my clothes were splashed with some terrible fluid mass. I later realized that it was someone's brains," the man said.

The powerful bomb blew up at the moment when it was placed on the marble floor of the airport.

"This conclusion can be made judging upon the character of injuries that people suffered. Only a few victims have chest and arms injuries. Most of the injured have had their legs injured, which brings up an idea that the bomb had been placed in a suitcase, and the suitcase was standing on the floor when the explosion occurred," investigators said.

Artyom Zhilinkov arrived at the airport at about 4:00 p.m. Moscow time.

"I was going to pick up my friends, there were a lot of people in the arrivals zone, about 150 people. I saw a man wearing all black, I saw him from the back. I think it was his suitcase that blew up. There were two columns in the room, and I was standing behind them during the moment of the explosion, and it saved my life. The crowd of people in front of me also took the blast wave. The lights went out, and people started running in panic towards the exit. I started running too, I thought that another explosion would follow. I came to my senses the next moment and ran back. I saw bodies and body fragments on the floor. I saw a man without a leg as I was running back. I grabbed a luggage cart, put that legless man on it and ran towards the exit. Then I returned to pick another victim," Artyom said.

"The paramedics and the police arrived in some 15 minutes. We - those who was not injured, and who did not panic - started helping them evacuating the injured," he added.

A police officer was seen running out from the airport several minutes after the explosion. He was all covered with human meat and blood, screaming: "I'm alive! I'm alive!"

The bombing was the worst terror attack since two female suicide bombers from the volatile North Caucasus republic of Dagestan blew themselves up at two of the capital's subway stations last March, killing 40, RIA Novosti reports.

Police have hinted the latest outrage may be linked to the Islamist radicals in the North Caucasus. Three suspects are being sought over the bombing, the news agency said.