No one needs modern feminists anymore? 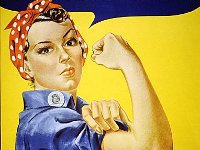 Some 100-200 years ago, feminists were fighting for women's rights to vote and receive education. Nowadays, the goals of the fighters for the rights of the weaker sex are far less global. Most of their requirements leave many people perplexed. It seems that modern feminists fight with their own shadows, entertaining other people.

Feministing.com website has recently announced an action, urging women to grow only one brow, like ladies do in Tajikistan, for example. The action was dubbed as Decembrow (December + brow). The action is being held to collect money for the charity foundation which defends women's rights and deals with problems of women's healthcare.

The appeal to grow only one brow raised concerns with many women, who naturally believe that it could be possible to raise money in a much more reasonable way which would not damage their beauty.

Now it seems that all that feminists can do is fight with official documents and dictionaries. Feminists feel at ease in the USA and Europe most - an American or a European woman can become a priest, she can sue her male colleague who cast a look on her breasts or paid a compliment to her nice legs.

It seems that modern-day feminists can struggle for women's right just as successfully as they can kill fleas. For example, the authorities of Gainesville, Florida, banned so-called ladies nights, when women were allowed to enter bars free of charge before 11 p.m. and have two-for-one drinks. Such nights are common for countless bars and night clubs all over the world. It seems that this is a win-win for both women and men: women enjoy free admission and drinks, while men enjoy the company of happy women in bars. However, officials of Gainesville believed that ladies nights violate the principles of sexual equality because the owners of bars and clubs use women to attract male clients.

In addition, the fighters for women's rights are concerned about traditional rules in written English, which is abundant with psychological sex discrimination. The same thing can be said about any other European language, including Russian. It goes about patriarchal traditions, which are typical for the majority of cultures. Aren't there any other, more important problems? There are many.

We are living in the 21st century, but women are still discriminated in many countries, such as Afghanistan and Pakistan. A woman there is like a powerless appendix to a man. Women living in other, more civilized countries, still have many reasons to stand up and defend their rights.

Still, many people think of modern feminists as man-hating women with crazy ideas. Ukrainian feminists, for example, organize publicity stunts to defend Ukrainian women under the slogan "Ukraine is not a brothel," but they just happen to forget to wear clothes.