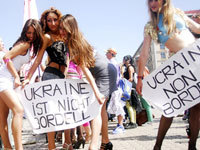 Women always wanted to speak out. In order to be heard, they would wear suits of armor, raise the banners of proletariat, hide their beauty underneath strict suits and win parliament seats. Nowadays, women have come to realize that it is much easier to attract public attention without any clothes at all. Women have started to fight their way through with their breasts.

Ukraine became the homeland of sexual revolution in politics. In June of 2008, a group of hot-blooded Ukrainian females, members of Femen female movement, undressed in the center of Kiev and started splashing in the fountain. The stunt was organized as an action of protest against the decision of the city administration to cut water supplies in Kiev's dormitories.

Femen's next action was more shocking. The women appeared in public dressed as prostitutes. They bared their breasts and stuffed dollar notes in their G-strings. The action was called "Ukraine is not a brothel" and was held to set out Ukrainian women's protest to foreigners, who come to the country seeking sexual favors.

Femen was founded two years ago, but the members of the movement still believe in their naked power. As a result, the women's public activities attracted attention of both European and American media outlets. There are 50 constant members in the movement and 300 activists.

Russia has not followed the Ukrainian example yet. However, a similar female movement has made its first public appearance in St. Petersburg in summer. Sexy activists decided to give people a lesson of basic safety to show people how to rescue themselves from floods. The women found out that the city administration had been investing a lot in the construction of anti-flood facilities, but used poor-quality materials for that. The beauties appeared in the streets demonstrating individual protection gear, life jackets, masks and fins.

Their next action was also related to water. The appealing activists appeared on Malaya Sadovaya Street wielding squirt guns and started shooting water at each other. The girls demonstrated a way to escape from summer heat.

In the past, the image of woman was strongly associated with modesty and chastity. Nowadays, young people perceive woman as a strong-willed person who looks at everything from above. A modest and quiet woman does not attract anyone's attention anymore. Naked woman's body is not considered shameful, that is why such movements appear.