A standard passport-exchange procedure, which a male resident of the Moscow region had to have upon reaching 45 years of age, had a very unusual ending. Both employees of the migration service and police officers were surprised to find out that the male applicant was actually a female, Pravda.Ru reports with reference to a press service of a local department of the Internal Affairs Directorate. 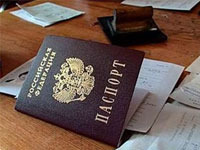 A male Muscovite filed a passport exchange application, but a further checkup showed that the ID previously belonged to a completely different person – a resident of the Saratov region – and was lost.

The situation became clear when the man confessed that he was actually a woman. He woman had a sex-charge surgery at a Moscow clinic several years ago.

The lady said that she was supposed to exchange her passport first before the surgery. She found someone who agreed to make her a fake passport for $2,000. As a result, the female Muscovite was holding the fake passport for several years.

A criminal case was filed against the woman for the use of the counterfeit document. The transsexual perpetrator will have to pay a fine of up to 80,000 rubles ($2,600).