A video clip of pushing and shoving at the sale of cheap laptops at one of Moscow’s Eldorado electronic stores has become the extremely popular on the Russian Internet. The cell phone video shows hundreds of people pushing each other in the attempt to get to the precious prize - a laptop priced at 9,999 rubles ($322), 50 percent below its regular price. 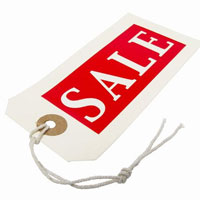 The video maker, a young man named as Ilyas Setdinov, said that so far over 90 thousand people have watched the clip online. Many TV channels approached him for a permission to show the clip on TV.

Only a few people managed to get the laptops during the stampede at the Eldorado store. However, nobody managed to get it at the price of 9,999 rubles. After adding payments for mandatory warranty and settings, the price climbed to at least 13,000 ($419). Those who complained were told: “If you don’t like it, don’t buy it. There are plenty of customers.”

On September 1st, the day after the infamous sale, a similar event was held in another store in Moscow. The event, however, was well organized, and by 9am there was a long line on Tverskaya Street. In order to avoid repetition of the competitor’s mistakes, the merchants brought in police and installed metal fencing. There was pushing and shoving again, but no accidents were reported. The media were still chewing over the Eldorado incident.

Similar events are held in Moscow on a regular basis. Recently, there was an iPhone sale with the advertised price of 9,999 rubles. However, the customers were forced to purchase a contract with a cell phone operator, which raised the price to 11,000 ($354).

Many participants of such events know what to expect - they are experienced bargain hunters. They buy several units at the reduced price and later sell them online at a regular price. For example, a person who buys six iPhones and sells five of them can make over 20,000 rubles ($645).

Why Stores Organize These Events?

Stores representatives say that this is a way to get rid of surplus. But experts assure that this is not the case. Besides, despite the promises that they practically give the stuff away for free, rest assured that even after a 40 percent price reduction the stores still make profit.

“There is the so-called crowd effect,” explains Anton Suvorov, a professor at the Russian School of Economics who specializes in behavioral economics. “When people find out that there is a sale somewhere, they hurry into that store. Even if they fail to get the item at a low price, they are likely to buy something else. The fact that the company can attract a new customer to its store is already a positive thing.”

It is interesting that advertisers consider an event with pushing and shoving a double success. “It is a powerful newsmaker,” Suvorov says. “When people laugh at those who get pushed in the lines they get to remember who sells the “cheapest laptops”.”

Of course, not every sale is a fraud. Sometimes you can buy good stuff at a good price. When the prices are too low, however, it should alert you. It either means that the item is not that good or that you were used to get a hot news topic.

When advertisers promise laptops and iPhones at half-price, it usually means: “What will you do for this deal?” It appears that customers will do a lot, and it is not limited to pushing and shoving.

Winter, 15C below zero, a crowd of people is seen near a giant barrel filled with water. Men and women hastily take their clothes off and dive into the water. A crowd of spectators cheers and jeers recording videos on their cell phones. No, it’s not an ice-swimmer initiation; it’s an event sponsored by the largest cell phone retailer in Russia. Ice-swimmers dive into the water at their own will, just to get a 50 percent discount on a cell phone. According to a newspaper, the company sponsoring the event reported that the website with the event pictures had higher ratings than a live broadcast of the Iraq war.

In the West customers will do even more. People are willing to run around naked and fight in the mud just to get a discount.

Outrageous sales happen, have happened, and will happen in the future. Judging by the examples from the West, they can be expected to become even more creative. Bargain hunting is turning into a life goal for some, and frugality is a new trend.