Several people were injured in a stampede during the sale of laptops at a large electronics store of Eldorado retail chain in Moscow. Official spokespeople for the company said that the batch of the special offer laptops was too small, RIA Novosti reports. 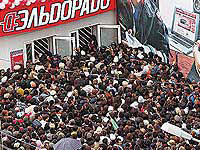 The sale of cheap laptops priced at 9,999 rubles ($322) was announced to start on August 30 at 4:00 p.m. at one of the stores of the company in Moscow. The offer produced quite a rush. A crowd of people gathered near the store, and many people attempted to make it inside shortly before the start of the sale. Sales assistants had to call the police to put a halter upon the crowd. The sale of cheap laptops was suspended.

The advertising of “the grand offer” and “the summer sensation” – laptops at only 9,999 rubles – was posted on the website of the retailer. The ads urged customers to get something what others would have twice as expensive – Acer 17-inch dual core processor laptops with 3 GB Ram and 250 GB HDD. “There are only 250 of these hot cakes,” the ad on the website said.

When the sale finally started, there was a mess with sales receipts in the store. Some people rushed to the cash desk to pay for the laptops and have the receipts to take their laptops, whereas others began to grab laptops from shelves. As a result, some had laptops but had no receipts, whereas others had receipts but could not get their laptops.

Two young men were hospitalized with injuries as a result of the stampede. A woman lost her consciousness and collapsed in the crowd because of the lack of oxygen. She was hospitalized as well. Sales assistants were climbing up the counters to escape the crowd.

All 250 laptops were sold out in less than one hour, RIA Novosti news agency said. An official spokesperson for the retailer said that the company was not expecting such a commotion during the crisis period, when the majority of Russians try to save as much as they can.

Eldorado is one of Russia’s largest retailers on the market of electronics. The company opened its first large store in the city of Samara in 1994. For the time being, the company has over 1,100 stores in Russia nationwide. Eldorado receives about $5 billion of profit every year.