Bodybuilder Denis Sarychev, 25, won all-comers bodybuilding competition of the Volga region, which took place in the city of Penza at the end of April. He took much effort to get prepared for the event keeping a very strict diet. 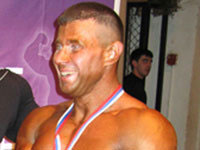 “I had very hard trainings five times a week. And during the two-week period before the competition my diet became much stricter – I was abstaining from drinking any liquid for three days,” said Denis Sarychev told reporters right after his victory.

See also: “The physical side of notorious girl power (photos)”

Doctors of the hospital where Denis spent his last days refused to give any comments.

“Any diet is a huge stress for the human organism. Especially when the diet is so strict. Extreme physical activities and dehydration of the organism in a combination with a high protein diet could easily provoke severe renal insufficiency. However, it is quite difficult to say for sure what really caused the athlete’s death, because he did not turn to medical specialists as soon as he felt ill,” says Natalia Tiugaeva, a Healthcare Ministry official in the Penza region said.

Pravda.Ru previously published an article about the Russian bodybuilder who become a millionaire and prisoner in the USA.

Nikolai Yasinovsky is a legendary persona in Russian bodybuilding. He is the only Russian man, who entered top 30 of the world's best bodybuilders. Yasinovsky's career started at the end of the 1980s. Nikolai remembers that a lot of his pals, who used to work out with him in a gym, gave up sports and became involved in business. Nikolai was passionate about his occupation, though.

Yasinovsky became the champion of the USSR in 1990. The Soviet team went to the USA the same year. In the USA, Nikolai got acquainted with Jeff Brennon, the owner of a gym chain. The businessman offered the Soviet bodybuilder to try and make a career in the States. Yasinovsky agreed and soon became the two-time winner of the prestigious US Emerald Cup Championship.

Nikolai obtained the right to participate in the US championship, although he was not holding the American citizenship. As soon as Yasinovsky's career started fading away, his American benefactor lost any interest in the athlete.