Russian bodybuilder becomes millionaire and prisoner in the USA

The former bodybuilder was eating only potatoes, giving away all his earnings to pay the rent

Nikolai Yasinovsky is a legendary persona in Russian bodybuilding. He is the only Russian man, who entered top 30 of the world's best bodybuilders. Yasinovsky's career started at the end of the 1980s. Nikolai remembers that a lot of his pals, who used to work out with him in a gym, gave up sports and became involved in business. Nikolai was passionate about his occupation, though. He could hardly make both ends meet: he was wearing one and the same pair of shoes all the year round, buying buckwheat and meat (which used to be short-supply food in the USSR back then). “All my accomplishments became possible owing to my great passion for bodybuilding. When I was walking along the streets, I was thinking about bodybuilding, when I was watching TV, I was thinking about bodybuilding, when I was eating I was thinking about it too,” Nikolai said. 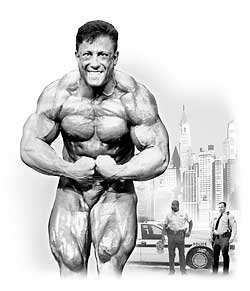 Yasinovsky became the champion of the USSR in 1990. The Soviet team went to the USA the same year. In the USA, Nikolai got acquainted with Jeff Brennon, the owner of a gym chain. The businessman offered the Soviet bodybuilder to try and make a career in the States. Yasinovsky agreed and soon became the two-time winner of the prestigious US Emerald Cup Championship. Nikolai obtained the right to participate in the US championship, although he was not holding the American citizenship. As soon as Yasinovsky's career started fading away, his American benefactor lost any interest in the athlete.

Nikolai was living at Jeff's; he was working as a manager at one of his gymnasiums. When the young man was left alone without the millionaire's support, Yasinovsky realized that he could only count on himself. Nikolai found a job of a washerman for $4.20 per hour. He had to wash 173 cars in nine hours during the first day of his work. “I remember that I came home, threw myself on the bed and fell asleep that instant. I told the boss the next day that if I had to wash the same number of cars again, I would just die. He simply replied that it was quite a relaxing day the day before yesterday because his car wash was usually servicing 300 cars a day,” Nikolai said.

The former bodybuilder was eating only potatoes: “I was frying them with some water, because I had no money for vegetable oil. I was giving away all my earnings to pay the rent. I lost 30 kilograms of my muscle weight in only three months,” said he.

After the tiresome car wash experience Nikolai worked as a security guard for $7 per hour. “A black man was the company's owner. I was the only white male in the whole neighborhood who was working for a black male. A Mexican bar was my first duty. It was a very dirty andstinky place. I had no car so I had to walk ten kilometers home after 12 hours of work. I was living in a small two-room apartment that I shared with 12 other emigrants,” recollects he.

Yasinovsky was living from hand to mouth for almost a year, until he met his country-fellow, who offered him to sell Russian steroids in the States. The endeavor proved to be a rather lucrative business. Steroids were extremely cheap in Russia: one invested dollar returned a hundred.

Yasinovsky purchased a house on the seashore in only six months; a Mercedes and a BMW appeared in the garage. When the man became successful, he invited his wife and eight-year-old son to come to the States. Yasinovsky started working out again and managed to make his way to the world of the American big sport. As it turned out, he only had to submit adequate documents to the American bodybuilding federation to prove his accomplishments in the USSR.

The athlete was about to participate in the Mr. Olympia contest, when he suffered a terrible car accident. His car ran into a truck that came racing around a corner on a red light. “It was an airbag that saved my life. The front of my car was squeezed. Doctors failed to take me out of the totaled car – they had to call a rescue service.”

When doctors examined Nikolai at a hospital, it turned out that his left leg became five centimeters shorter than the right leg on account of the hip joint displacement. When the man returned home he had to learn about his father's death. Nikolai gave way to despair: he was not coming out of his house for two months. His mailbox was eventually filled with a lot of bills, including an expensive bill for medical services.

Nikolai had to start selling steroids again. Steroids, however, were already classified as narcotics in the USA. It is worth mentioning that steroids still enjoy legal distribution in Russia. Nikolai was aware of the danger, although he did not sense the right moment to stop.

The FBI arranged Yasinovsky's arrest in the style of a typical American action movie. The batch of steroids was rather small, though: it was enough to jail Nikolai for 18 months. “The prosecutor was furious, because the FBI had spent almost a million dollars on the investigation about me. When they brought down sentence on me, they tried to win me over to their side to cooperate, to make me a whistle-blower so to speak. I declined the offer. In return they made me go through seven jails in six months – this is what they call the “diesel therapy” here,” Nikolai said.

Nikolai Yasinovsky returned to Russia with only three dollars in his pocket. He and his family settled in Moscow, where Nikolai currently co-owns a sports club.