As summer closes in, the number of people who are eager to go on a diet increases drastically, but in three months most of them give up this idea, for they notice no measurable results. Why do they fail to lose w eight? 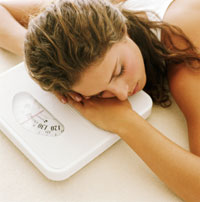 There are quite a number of limitations. Most people associate weight loss with an outright ban on eating. Doctors do agree on limiting a quantity of food, but they also insist on certain foods (but not on the total banishment of them) and a balanced diet. Dieticians know from their experience that it is very difficult to reduce the usual quantity of food, which is the reason of most failures. You should take a more realistic attitude to the problem and change your diet incrementally: keeping the same quantity and controlling calories. Extreme transition to a mono-diet (based on water-melons, grapefruits or any other fruit) may cause lower concentration of attention and inability to think clearly in three days after you start it.

People lack physical activities. As a rule, people on a diet fully concentrate on nutrition and completely forget about physical exercises. Although the body obtains fewer calories, the calories should be burnt by way of exercises. Moderate physical exercises promote the replacement of fatty tissue by muscle tissue.

Fewer meals stimulate hunger pangs; thus, as soon as people get access to food, they eat a lot more than the body actually needs.

A diet aggravates diseases. Without consulting a dietician, people keep to a strict diet and do not take into consideration their diseases, which may cause aggravations. Raw vegetables, which are included in many diets, can be bad for those suffering from gastritis, stomach ulcer or pancreatitis. People who banish fats from their diet have a lower level of harmful cholesterol in their blood, but at the same time they have a lower level of useful cholesterol that protects blood vessels from atherosclerosis. Studies suggest that recurrent attempts to lose weight cause dysfunction of the immune system – the lower number of so-called natural killers, elements of blood that eliminate microbes in the organism. Besides, the more often people endeavour to lose weight (once in several weeks), the fewer protective cells they have in their blood.

When weight no longer decreases, people give in. As a rule, people have the most measurable weight loss during the first and second weeks, and then they may lose only 200- 500 grams a week. After the initial success they regard it as a failure. However, dieticians are against speedy weight loss. The nervous system and cerebrum require nutrition. It is much more wholesome and more effective to lose weight gradually – four-five kilograms a month at most. You can achieve this by a low-calorie diet, fasting days and physical exercises.

It would be best if you found a diet that you could permanently stick to without regarding it as a calorie-controlled diet and without losing your nerve.

In fact, studies show that 75 percent of women consider themselves overweight, but only 25 percent need a diet.