Boris Zherlygin is a sports physiologist. He spent many years working with athletes and developing optimal training and nourishment schedules for them. The experience returned sophisticated knowledge about physical capabilities of a human being under considerable physical strain. 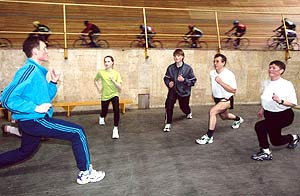 Boris Zherlygin's mother was diagnosed with diabetes. The disease resulted in severe complications – ulcers on feet and poor kidney activities. Doctors were powerless to help Boris's mother – that was the time, when the man's life took a sudden turn. Boris declared “personal war” on diabetes: he started studying the subject, trying to find out every detail and reason, which could cause the dangerous ailment.

It has been more than ten years since that time. Boris Zherlygin's mother, Olga, is 87 years old, now; her blood pressure and sugar level are normal. In addition, the elderly woman's eyesight has improved considerably – she can read a newspaper without her glasses on. Last year the woman took part in a local running competition, in which she successfully ran the distance of three kilometers. “In the beginning I did not believe my son. I did not believe that he could help me; I was preparing myself for another world. My thoughts are absolutely different now: I want to live more, it is such a pleasure to live with no pain,” the woman said.

Boris Zherlygin's method of treating diabetes seems to be too simple: regular nourishment, physical exercises and a positive psychological spirit push the ailment aside. Only strong-willed people, however, can succeed in defeating diabetes with the help of such elementary rules.

”We do not invite those, who lay all hopes on a magic pill. However, I would like to stress that out that people can save themselves from diabetes even if they just use publications about our method. Such occurrences are not frequent, of course, but we have had precedents like that before. I would like to pay your attention to the word “save” that I just used. We do not use any medical processes in the practice. We simply help people change their lifestyles and symptoms of the disease vanish as a result of the work. Our concept looks more understandable, if we take a look at the reasons, which lead to diabetes. The list includes unbalanced chemical composition of cells, their incomplete physical capacities and a lamentable state of the nervous system. Regular diet improves the chemical composition of cells, whereas physical exercises normalize their physical condition. To crown it all, it is not really hard to teach a person to control negative emotions,” Boris said.

The diet is rather strict: no tinned or canned food, as little of meat, bakery and sweets as possible. Every individual receives his or her own scheme of physical exercises, the total range of which is rather diverse: up to a hundred of different movements even for elderly people.

The sports club “Farewell to Diabetes” exists in Russia for ten years already. Hundreds of people have been relieved of the terrible illness with the help of Boris Zherlygin's organization. Doctors, who examine such patients, usually say that they cannot withdraw the diagnosis of diabetes, although they do not see any symptoms of the disease. It is important to note here that it goes about the widespread type 2 diabetes.

Alexander Polyak became one of those people, who tested the new method on his personal experience. Mr. Polyak used to be a successful manager in a computer company, when a sudden diagnosis of diabetes ruined both his professional and personal life. Doctors recommended the man to file for disablement, although Alexander was not enthusiastic about it at all. The man started looking for a different way out. When he studied literature on diabetes, he came across the name of the club, “Farewell to Diabetes.” Now Alexander Polyak can run for ten kilometers, he weighs 72 kilos; his blood sugar level and pressure have become normal.

Specialists of traditional medicine in Russia refused to welcome Boris Zherlygin's method: the new technique did not comply with traditional approaches to diabetes treatment. However, no one could forbid people to do sports – that is why the club continued its existence. On the other hand, the club's founder has already won a lot of followers among champions of traditional medicine – doctors often use his recommendations, albeit on the sly, to help their own patients.

Boris Zherlygin has repeatedly addressed to the Russian Healthcare Ministry with a request to conduct official expertise for his anti-diabetes method. Ministerial officials turned the request down. “I did try to bring the method to a trial,” a cardiologist, who wished to remain anonymous, said. “A half of my patients suffer from diabetes. I can perfectly understand the reason why such a non-medical approach can bring so much progress. However, the method needs to be officially proved to entail its massive usage. An official trial is absolutely necessary,” the specialist said.

”Russian scientists developed special equipment, which can be used for controlling the developing process of certain human tissues on the cell level,” Boris Zherlygin said. “This is a remarkable supplement to our method. The new apparatus gives a good chance to simplify the treatment process. Our club has also found a good partner in Germany. A group of researchers from Berlin is ready to study the technique and promote it both in Russia and in Germany,” Boris said.