A 'bird boy' was found in Volgograd several days ago. A 7-year old boy was taken away from his mother, 31. A woman took an interest in birds more than in her own son, that’s why he became a real Mowgli. 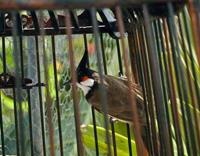 A boy lived with his mother in a 2-room apartment full of cages with feed and droppings. She had her own domestic birds and fed wild ones. A woman neither beat him nor left him without food. She just never talked to him. It was all the birds that communicated with the boy and taught him birds’ language.

“When you start talking to him, he chirps”, - says Galina Volskaya, a social worker of Kirovskiy region, Volgograd. A boy doesn’t understand human language at all. He just chirps and when realizing that he is not understood, starts to wave hands in the way birds winnow wings.

The boy’s mother signed an abdication from a child. A boy now lives in the asylum, but soon will be transferred to the center of psychological care. The child has a so called “Mowgli syndrome”, which in the past years has become widely spread. for example, during the last 2 months 5 children with the same symptoms were found.

In Cambodia a 27-year old wild woman was recently found. She lives in the jungles, walks nude and doesn’t understand human language. However, a local policeman acknowledged her as his daughter that got lost 18 years ago while at 8. In Africa a 10-year old boy was found among the pack of monkeys. In the USA 2 girls were brought up by a pack of monkeys. In Russia a 9-year old boy became a head of wild dogs’ tribe.