Researchers looking into the case of “Alionshenka the Alien” have arrived at a sensational conclusion: the mysterious creature did not catch his death of cold as previously thought. They believe the supposed alien was killed. 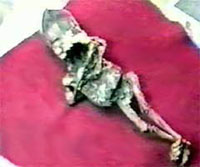 Read part first of the article about the Russian alien here

“He didn’t die from natural causes,” said Vadim Chernobrov, a coordinator with the public research center Kosmopoisk. “We found out that his skull had been fractured,” Chernobrov added.

The mysterious dwarf was found near the town of Kyshtym of the Chelyabinsk region. Stanislav Samoshkin is a morbid anatomist who performed autopsy on the body of the dwarf in a local hospital. He was the first to claim that the creature was a non-human being.

“The human skull consists of six bones. The skull of that creature was made up of four bones,” Samoshkin said.

Russian and foreign researchers have been trying to unravel the mystery of the “Uralian alien” for eleven years. The story looks like a detective novel in progress. The body of the dwarf was reportedly stolen. The key witness to the case, an old woman who actually named the dwarf “Alioshenka”, died a sudden death.

The dead body of Alioshenka disappeared. In fact, the investigator assigned to the case reportedly handed the body to some perpetrators who walked away with it.

“They introduced to me as ufologists. I was pretty sure they were real scientists, it never occurred to me they could be the impostors,” Major (Ret.) Vladimir Bendlin said.

A TV crew from Japan was filming a documentary on the Kyshtym alien at the time. The Japanese tried to buy out the remains of the dwarf. However, their attempts ended in failure after some local journalist got the wrong meaning of a few words said in English by Deguchi Masao, the producer with the TV crew.

“I remember talking to Deguchi Masao about the sum they could have paid to a person who had the mummy of the dwarf at the time. The figures mentioned at that meeting ranged from two hundred up to one thousand dollars. We were talking in English. A local woman journalist must have got the figures wrong. She printed an article in her paper, saying that the Japanese were ready to pay $200,000 for the stolen creature. The article was soon reprinted by other papers. The Japanese didn’t have such a sum on them so they had to refute the announcement. As a result, the deal fell through, and the owner of the mummy stepped into dark,” Chernobrov said.

Fortunately, the police videotaped the body of the dwarf before it was stolen. Major Bendlin managed to locate some people who had seen the “alien” while he was still among the living.

The dwarf was reportedly found near the village of Kaolinovy by Tamara Prosvirina. She told her neighbors that she had found a “handsome boy called Alioshenka.” The neighbors believed the old woman was raving again. The point is she had been previously treated for a mental disorder. The neighbors called an ambulance, which took the woman to hospital. One of the paramedics later described the object lyingin bed in the woman’sapartment as a “cat wrapped up in rags.”

The woman was admitted to a mental hospital. Meanwhile, her relatives leased the apartment to one Vladimir Nurtdinov. He came across the dead body the size of a cat while cleaning up the apartment one day.

“I was about to throw it away like a piece of trash. But that thing looked like a real alien, I kind of liked it. Finally, I put it on the garage roof,” Nurtdinov said.

The sun desiccated and tanned the body of Alioshenka to the utmost. Then Nurtdinov hid the body in a garage. Later Nurtdinov was taken into police custody under suspicion of stealing electrical wire. He promptly told the police about the strange object hidden in the garage.

Below is an account by Tamara, the old woman’s daughter-in-law, who claims to have seen Alioshenka while he was still alive:

“I used to visit my mother-in-law twice a week. She was living on her own. On that day I brought her foodstuffs just like I did before. I was about to leave when she told me: ‘We’d better give some food to the baby too.’ Then she showed me to the bed. I took a closer look at it and saw him. He was on top the bed, squeaking some funny sounds. I could see his mouth shaped like a small pipe. His tiny scarlet tongue was moving. I also spotted two teeth inside. In a way, he looked like a little baby. His head was brown, and his body looked gray. I didn’t see any eyelids. He didn’t have any genitals either. His head looked like an onion. And the pupils of his eyes were widening and narrowing just like the cat’s eyes do when you turn on the light and turn it off again several times in a row. The fingers on his hands and feet were pretty long. I only bothered to ask my mother-in-law where on earth she’d got the monster from. She told me she’d found him in the forest. She kept calling him ‘Alioshenka.’ She gave him a candy and he started sucking on it. I thought it was some kind of animal.”

Researchers believe that Tamara’s account is a true story. She has been repeating it word by word for years without adding up any new details.

“He was giving off that smell, you know, one of a kind. You can’t take it for any other smell. Actually, the smell was pretty agreeable yet somewhat nauseous at the same time. And he didn’t pass any liquid or solid waste matter. He was sweating, and that was all. I saw the mother-in-law wipe the sweat off his face with a rag,” Tamara added.

The old woman died in a hit-and-run accident in August 1999. She was knocked down by a car just a few days before a team of researchers arrived in the town from Moscow. Researchers phoned her relatives shortly before the accident occured. Academician Mark Milkhiker was going to put Prosvirina in a state of hypnosis, a method used for helping the patient recover information buried in his subconscious.

Prosvirina’s relatives are confident that the death of the old woman was not an accident.

“You can hardly see a vehicle crossing this town during the day. Where the hell did that car come from?” Tamara asked.