Spirits and ghosts appear during holidays and anniversaries

One of the recent Pravda.ru articles about ghosts caused a lot of disputes and questions. So we decided to interview a well-known ghost expert Leslie Rule, who is also the best-selling author of books on ghosts and spirits. 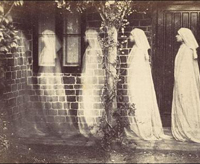 Spirits and ghosts appear during holidays and anniversaries

Pravda.ru: When do ghosts usually appear?

Leslie Rule: A ghost can appear at any time of day or night. They often show up during a time that was significant to them in life. For instance, if they always arrived home from work at 2 p.m., they may materialize near the entrance of their former home at 2 p.m.

Spirits are also frequently seen during holidays and anniversaries and other emotional occasions.

Though a ghost can appear anywhere, witnesses most often report seeing them in the following places: Peering from windows, on the stairs, in hallways, sitting on a chair or bed, and in mirrors!

Pravda.ru: How should we behave if we see a ghost?

Leslie Rule: A ghost is simply a person or animal who no longer has a body. If you see a ghost, you can ask them what they want. Be aware that they may not realize that they are dead. Gently explain that they are no longer alive and urge them to look for the light. Tell them to move toward the light so they can be reunited with other loved ones who have passed on.

Pravda.ru: Are there ways to get rid of a ghost in your home?

Leslie Rule: To get rid of a ghost, sometimes all you have to do is ask them to leave. Do NOT hold seances or play with Ouija boards, as many psychics warn that this may open a door for undesirable spirits into your realm. If people are uncomfortable with the spirits sharing their homes, I advise them to pray for relief.

Pravda.ru: Is there any connection between ghosts and UFOs?

Leslie Rule: That is an excellent question. I have never noted a connection between the two, but that does not mean that one does not exist. UFOs or "unidentified flying objects" by their very nature are mysterious. When it comes to ghosts, no one knows everything about them. Perhaps one day, we may see a connection between UFOs and spirit appearances.

Pravda.ru: Are there dangerous and aggressive ghosts?

Leslie Rule: I have never studied a case where a person was physically harmed by a ghost. If a person was injured during a ghost encounter, it was probably because they stubbed their toe while they were running away! I doubt that it is possible for a ghost to physically hurt a person.

A United Kingdom insurance company actually has a "Spooksafe Policy!" Terry Meggs, the owner of the Royal Falcon Hotel in Lowestoff, Suffolk, purchased the Spooksafe policy from the Ultraviolet Insurance Company after he saw shot glasses shooting across the bar as if invisible hands were pushing them. The hotel is haunted and is also next door to an old graveyard, so Meggs was concerned that someone would be harmed.

In an unrelated case, the same insurance company claims that they paid out 100,000 pounds when an American woman died after being thrown overthe banister of her home by a ghost. They did not name the victim and I am very skeptical.

Pravda.ru: Is it true that most old castle are haunted by ghosts?

Leslie Rule: Ghost are most frequently experienced in places where deaths occurred--particularly violent deaths. As most old castles have had a history of deaths associated with them, they would also have restless spirits clinging to them. So the answer is yes, most old castles are haunted!

Pravda.ru: Is it possible to catch a ghost?

Leslie Rule: No, I don't think so. Ghosts are not confined by the material world. They can, of course, move through walls. Though they may be "stuck" because of unfinished business, they can apparently move on once their issues are resolved.

Pravda.ru: How do you distinguish between a real ghost and a hallucination?

Leslie Rule: When sane, fully awake and sober people witness an apparition, it is usually not a hallucination. When more than one person witnesses the same thing and describes it the same way, that validates the ghost sighting. Sometimes witnesses are shown photographs after their ghost sighting and recognize the apparition they saw as the once living person in a photo. This, too, validates a ghost sighting.(Please keep in mind that spirits often appear to people in their dreams. It is believed that this is a time when people are most receptive to the spirit world.)

Pravda.ru: What other forms of extraterrestrial activity may appear in our everyday life?

Leslie Rule: Millions of people report seeing angels! These loving spiritual beings look over people and help them in their times of need. An angel appearance results in a witness feeling a great sense of peace. Angels can appear in many forms. They often look exactly like human beings. They may also look as tradition dictates! They may have golden hair and huge white wings!

While a ghost of a dead person may very well step in to help people and have angel-like behavior, angels are believedto be spiritual beings who have never been human.

Pravda.ru: Why did you decide to become a paranormal activity expert?

Leslie Rule: I grew up in a haunted house! It was built on a Native American burial ground! Though the ghosts there were seldom seen, they were definitely heard! We had the ghost of a woman who sobbed as if her heart was breaking. Actually, she was heard throughout the neighborhood, as if she were wandering around looking for something.

This sparked my lifelong fascination with ghosts! I wanted to know all I could about them. I also wanted to prove their existence. I strive to validate ghost sightings through archival research. I look to find a violent death that occurred in or near a place where there is a paranormal activity. I try to find obituaries of people who died who resemble the ghosts seen.