People communicate with ghosts during sleep 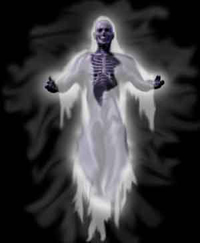 People communicate with ghosts during sleep

Anyone who is dead is a ghost. And we know there are lots of dead people out there. There are more ghosts than living people. Ghosts are all around us. Ghosts interact with us on an emotional level. They try to influence us to get us to react to them.

The good ghosts could be considered to be our allies and spirit guides. They communicate with us on an emotional level, encouraging us, inspiring us, sometimes protecting us, even warning us of potential dangers ahead.

The bad ghosts could be considered to be our enemies and they try to affect us on emotional levels in negative ways. A negative ghost will usually appear during arguments, fights, criminal activity, unhappy or depressive states of mind, severe substance abuse, and just about any negative event that could possibly be aggravated by an unseen strong emotional presence.

That strong emotional presence that is unseen is usually a ghost.

Most ghosts are good, and have good intentions. Ghosts also appear very often during our dreams. It is natural for us to want to communicate with loved ones and friends who have passed on. Most people communicate with ghosts during sleep. During our waking state, certain emotionally charged environments like old buildings, homes and apartments, violent activity or crime scenes, severe substance abuse, anger and depressive states of mind, can create an atmosphere where ghosts can be seen more easily. We all generate and release emotional energy into our environments. This can accumulate in our living and working environments, and attract ghosts.

Negative ghosts feed on fear, anger and rage. Negative ghosts are the only ones we need to worry about. Never be afraid of a ghost. Never panic. They pick up on that, and it makes them stronger, more bold, and more connected to you or your property.

It is very natural for us to have positive ghosts around. They are Spirit guides. They could be ourloved ones or friends we have known. Good ghost do not live in our homes. That's important to understand. They have better things to do. They do communicate with us and try to help us in many ways. But they are not attached to us, our homes or our businesses. They're not around us all the time. They give us our space.

Negative ghosts, or ghosts with bad intentions, do attack individuals, families, businesses, and groups. They can also be territorial and attach themselves to property. There are two kinds of negative ghosts. Ghosts that have been human. And ghosts that have not and have no love for humanity.

Some ghosts are very negative and very powerful. They have spent a great deal of time and effort learning how to manipulate other beings on an emotional level. Sometimes when the atmosphere is right, they can also affect physical reality.

The best way to get rid of a negative ghost that's in your home or business is an Exorcism. Sometimes if an attack is severe enough, a professional Exorcist is required to properly clear the home.

Most ghosts that have negative intentions can be dangerous and aggressive. A negative ghost is usually, but not always, a negative person who is dead.

A person who was doing negative things during their lifetime, very often continues to pursue negative activities and goals after death. Most people don't change that quickly, and death is no exception. Most of the negative ghosts that we come into contact with are essentially ghosts engaging in morally criminal activity.

Negative ghosts attack just about anyone they feel they can manipulate. It happens every day all over the world. In every city. In every village.

Another kind of negative ghost, which is commonly referred to as a demon, or evil spirit, also attack businesses, families, individuals and homes. They're much more powerful and adept at affecting human beings on an emotional level. They're very dangerous and usually highly intelligent. They may never have been human. And they most assuredly do not like us. Although not as common as a human ghost, demonic spirits do exist and do attack people.

Negative ghosts also attack individuals for revenge, or to even some kind of score. A ghost that has negative intentions may decide to stay in our home or business. They can become attached to individuals and property, and can be very territorial. Some ghosts become attached to places they have lived or worked in the past. Their inability or unwillingness to move on causes them to latch on to things they have known, places they have been, people they have spent time with.

Long ago, many people lived in each castle. Many emotional events took place in these huge dwellings. Sometimes bizarre religious practices and even physical restraint and torture occurred. Over the span of time, trapped emotional energies causes ghosts to take an interest in such emotionally laden environments.

For decades, the media have focused on ghosts haunting mansions and castles, well-known places or rural areas Ghosts spend very little time in empty buildings. Ghosts can easily move from building to building, village to village, city to city.

There are many ways to perceive a ghost. Visually through the eyes is just one of the many ways. We can also hear ghosts. But by far the most commonly used method of perception is, telepathically through the mind. This is the most natural way to perceive a ghost. The feeling one gets, is like being in two places at one time. Seeing two things at once. A ghost is usually seen with the mind's eye. A ghost is usually heard with the mind's ear. Ghosts do not have vocal cords. They have no physical attributes at all. But they can communicate with us telepathically and emotionally. And they do. Hallucinations or imagination can play a very important part in perception. We Humans have active imaginations, and can dream up just about any visual or auditory manifestation.

This article is based on the interview with Jeffrey Seelman, Expert on Exorcism, Spiritual Energy and Paranormal Investigations at ExpertVillage.com

Pravda.ru: Jeffrey, why did you decide to become a paranormal activity expert?

Jeffrey Seelman: I was born with psychic ability. When I was young, I realized that I was able to see the spirit or ghost inside of each one of us. I thought everybody could. I started to communicate with spirits and even aliens at a very early age. They came to visit me for their own various reasons. At first I was quite terrified, not really understanding what I was seeing, and having no explanation from adults or school.

As I grew older, these things became more natural for me, and yet I kept pretty quiet about my feelings. After serving in the United States Air Force, I began to study Exorcism, Clearing concepts and the fine art of spiritual ethics and morality during the 1980s. Exorcism and spirits are subjects that came naturally and quickly to me. In 1992, after successfully helping several people deal with negative ghosts in their homes, I decided to take my concepts and talentto the public with STARCLEAR.com

I have the ability to remove negative spirits and negative emotional energy from individuals and their living and working environments. Helping families, and confronting negative spirits is a necessary and rewarding part of my job.
My deeply held connections to different kinds of powerful, yet good spirits, and my ability to deal effectively with the ones who are evil, have led me to conclude that it is my duty to help others understand the nature of spirits or ghosts, and our natural ability to protect ourselves, our families and our environment from their emotional attacks. This is my life's work!