On October 17th, 2005, a return capsule of the Chinese spacecraft Shenzhou-VI successfully landed in Inner Mongolia. Two taikonauts (taikun – Great Emptiness) returned to Earth on board the spacecraft. The Chinese manned space mission duration was 115 hours and 30 minutes. Estimated cost of the Shenzhou program is $111 million. 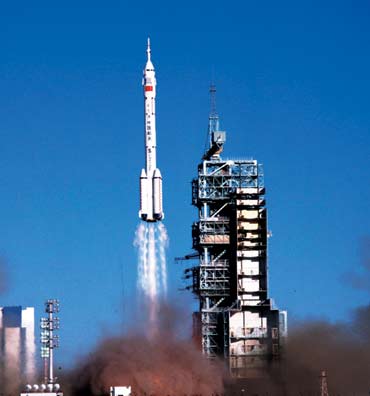 The success of the second Chinese manned space mission created far-reaching geopolitical consequences that are a lot greater than a sheer technological achievement. “The ultimate goal of the Chinese manned space program is to build a permanent space laboratory and engineering system,” said Tan Sianming, press secretary of the manned space program of China, shortly after the landing. The plan for 2007 features a spacewalk. A docking in orbit is slated for 2009-2012.

Today's China is becoming the only world nation which is capable of competing with the United States in the field of the most important issues in terms of technology and politics. China has an impressive economic foundation to rest upon. According to September report by Organization of Economic Cooperation and Development (OECD), within the next five years China's economic growth rate will be higher than that in most Western countries.

If China's economy develops as predicted by the OECD analysts, China will be able to commence the lunar exploration program at the end of a second decade of the 21st century.

Russian experts were asked to comment on two issues:

- The progress made by the Chinese manned space program;
- China's capability to build a space station and a lunar base in the foreseeable future

Lev Zeleny, corresponding member of the Russian Academy of Sciences, director of the Institute of Space Studies:

"I know that the Chinese have a comprehensive multistage program for the exploration of the Moon. It looks like the program will be a success. A new generation of the Chinese is calling the tune out there. They are not like the Chinese we got used to in the past. It is largely the people who worked in the West for several years, they learned everything they could during their foreign experience. When they came back to China, the authorities created excellent working conditions for them. There are still some specialists who belong to the older generation but all of them play second fiddle to the young blood."

"I am really impressed by a cautious approach of the Chinese. They launch a spacecraft with animals once a year. Then they carry out the first manned mission. They launch the second manned mission after a considerable break. They are obviously very cautious. That is the way they have chosen.

"They unveiled their objectives and said that the job would be done in a very short period. However, it is quite difficult to make accurate predictions at the moment. All and all, the Shenzhou missions are a big success of the Chinese. I believe China will become a strong player in terms of international space exploration," the expert said.

Ivan Moiseev, scientific leader of the Institute of Space Politics:

"Unlike the USA and the USSR in the past, nowadays China is moving slowly yet surely while building up its space program. In terms of science and technology an emergency situation would be a very unpleasant thing to deal with for them. It would equally have a very negative impact on the social and political aspect of the program. Considering the above, I believe that a lunar space station will be completed in some fifty years or so. However, I view the launch of the second manned mission as a positive event," said he.

17:30
American Marine: Pro-Russian ideas are spreading among US mercenaries in Ukraine
17:16
Woman killed by train while staying inside wooden toilet cabin
16:56
War correspondent: Kyiv switches to the tactics of duct tape and toilet paper
16:30
Ukrainian General: This isn't Call of Duty –– US warehouses are empty
16:21
British MP explains how Russian FM Lavrov outplayed Boris Johnson
15:48
Kyiv Mayor Vitali Klitschko divorces his wife Natalia after 26 years of marriage
20:57
Video shows moment of Salman Rushdie attack
19:16
Russia will face serious sanctions as USA will not recognise Donbass referendum
18:57
USA successfully empty European armouries having supplied all weapons to Kyiv
18:21
Chechen war veteran who now works as drag queen sings Russian anthem in a gay club
World
The Guardian reveals when the West will stab Ukraine in the back