The beginning of the third millennium saw a new splash of enthusiasm for space flight to Mars. Scientists in the United States, Europe, Japan, and Russia (Soviet specialists at the Korolev Design Bureau have worked on the Mars project since early 1960s) are drawing up plans of a manned space mission to the Red Planet. Doctor of Technical Sciences Oleg Tsygankov, a leading specialist at Energia Rocket Space Corporation, speaks with our correspondent about issues relating to the future mission to Mars. 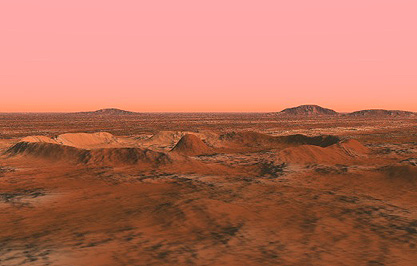 Q: Mr. Tsygankov, what is the key to a successful manned mission to Mars?

A: There are few main factors including a crew's ability to work hard after a long flight; a degree of perfection in terms of design and working specifications of protective equipment; technical and ergonomic qualities of tools and equipment. The abilities of a cosmonaut-operator working in a spacesuit outside the spaceship should be studied beforehand. The approach proved fully effective while servicing open space operations of the Russian space stations.

A Martian spacesuit as an independent system of life support and physical conditions of the environment. Energy consumption of a cosmonaut and duration of a work shift also depends on the spacesuit's specification.

Q: Let us imagine that a spaceship has landed safely and “all systems are running well.” What will the crew do next?

A: Above all, the crew needs to leave a lander. Crewmembers will have a very limited period of adaptation to gravitational conditions of a planet whose gravity equals 0.38 gravity of Earth. Climbing out of the lander, walking about the broken terrain, working in a suit under excess pressure – all the above will be more wearisome than operations in zero-g conditions.

Q: When do cosmonauts start exploring the planet?

A: The crew will have to explore the planet by walking if they do not have some kind of a machine for long-range movements. Research activities will be conducted within an area measuring 100-500 meters to correspond to scientific interests and security requirements. The crew will collect samples and seal them in airtight capsules and bags; a ditch will be dug out in the soft and shifting soil; samples will be photographed and videotaped on site. The crew will also conduct some drilling operations using a drill and a set of tools.

Cosmonauts will have to walk around the broken terrain to carry out the job. The broken terrain has slopes measuring 20-30 degrees. Basic characteristics of a spacesuit and flexibility of its lower extremities are essential for making it a comfortable and easy gear to use. Maintaining a steady vertical position is one of the requirements.

The cosmonaut simply can not do without a quality spacesuit. The gear should enable him to kneel down (standing on one kneel at least) and have the use of his arms while manipulating tools and instruments. He should be able to get back onto his feet if he falls to the ground. A mechanical protective system should be provided for spacesuit controls and outside components sensitive to damage. Steps should be taken to ensure that a crewmember is evacuated in the lander in case of an emergency or first aid procedures are followed properly in the field.

Q: What human abilities do you think should be subjected to research on Mars?

A: A model experiment could be the first step. Flying aircraft right after flying and landing the Souyz spaceship was part of the Buran project pilots training program. They had to fly Tu-154 using controls similar to those at the Buran and MiG-25. Thus the researchers tested the cosmonauts' ability to fly aircraft after spending a certain period in the conditions of weightlessness.

The same methods could be used for experimental testing of a cosmonaut's readiness to open-space operations and his potential work performance. A cosmonaut will be brought to Moscow right after completing his long-term mission (up to 6 months) at the ISS. He will put on a spacesuit, a “man-spacesuit” system will be fixed at 0.38 g, a cosmonaut will perform regular work typical to activities on Mars.

Q: Could you say a few words about the makeup of a crew?

A: The number of crewmembers could total 4-6 cosmonauts. At least two people should be designated as an exploration team. Candidates should be certified specialists trained in a few areas because it is impossible to avoid combining professions. Here is an example of a possible  combination: engineer-physicist-electronics specialist-mechanic; geophysicist-geochemist-geologist-specialist in planetary studies; biochemist-biologist-microbiologist-medic. Every candidate to a crew should be a certified pilot-navigator-flight engineer. Those who want to join the exploration team should complete at least one space flight.