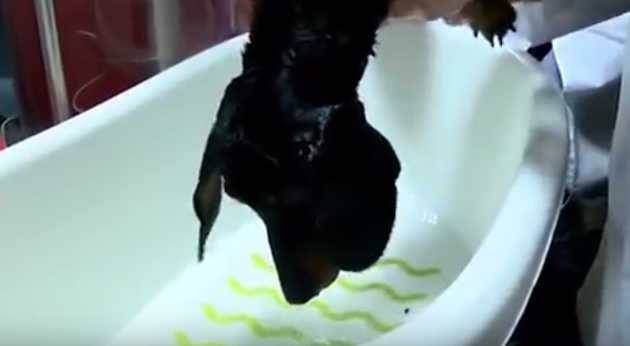 The disturbing video of the experiment showed the scientists placing a dachshund into a narrow vessel filled with a liquid saturated with oxygen. "The liquid enters the lungs, and it turns out that the animal starts breathing liquid," a researcher tells the people present, including Vice Prime Minister Rogozin and Serbian President Vučić.

The footage shows the dog panicking and trying to get out of the vessel with water, but as the scientists put the animal into the water upside down, the dog starts breathing underwater through its open mouth. Afterwards, the scientists pulled the dog out of the vessel and held it above a plastic basin. The water is seen coming out of the animal's mouth. When the researchers wipe the dog with a towel, the animal coughs as Rogozin and Vučić are seen laughing nearby.

Russian bloggers found the experiment extremely cruel and inhuman. Many suggested conducting the experiment on the happy officials. Others wondered if it was an act of animal cruelty or scientific knowhow.

The Serbian president stroked the dog after the experiment and noted that he was "very impressed" with the demonstration.

Liquid breathing is a development of the Foundation for Advanced Studies, which, according to project manager Fyodor Arsenyev, can be used to rescue submariners in the event of an accident. It is impossible to quickly ascend to the water surface from the depth of more than 100 meters: the water column triggers caisson disease, when the blood clogs blood vessels and kills a person.

To avoid fatal consequences during an emergency, submariners will be equipped with a special device containing no nitrogen. In this case, the human lungs will not be compressed, and a submariner will be able to ascend to the water surface to safety.

Commenting on the experiment, Putin's press secretary Dmitry Peskov said that he could not understand why the experiment attracted so much attention. "The dog is alive. Why all the questions? I can't understand. No one was torturing the dog," he said.

WARNING: Some viewers may find the video disturbing