US magician David Blaine is world-known not just for his shows, but also for his constant attempts to test the capacities of his own body. His latest record that entered the Guinness Book of World Records was set on April 30 of the current year when he spent 17 minutes and 4 seconds under water without an oxygen mask. 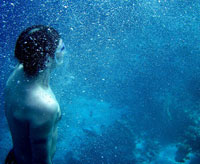 The stunt was taped and later aired at The Oprah Winfrey Show. David was breathing pure oxygen for 23 minutes to lower the concentration of carbon dioxide in blood. Ralph Potkin, a scientist, who studies the human ability to stay under water without oxygen for a long time, observed his state of health. He examined Blaine after he had set the record and found no abnormalities.

David Blaine had planed to stay under water for 23 minutes, but he felt his pulse quickening and saw the assistant signaling him that the previous record (16 minutes 32 seconds) had been beaten, so he came up.

The idea of a human being capable of living below ocean’s surface, like it happens in science fiction novels, still leaves scientists restless. But nobody has tried to implant gills to man. Scientists attempted to implant them to mice and dogs: the animals could even breathe with their new organs for some time under water. However, the animals died afterwards when their bodies rejected the gills. Researchers chose another way: they started inventing equipment for extracting oxygen from water.

In 1976 US biochemists Bonaventura (husband and wife) designed an appliance that imitated gills and worked on synthetic hematoglobulin. But they did not manage to construct it. Their drawings and the right for further development were purchased by a company specializing in making artificial blood and apparatus for its circulation. Rumours had it that in fact the Pentagon became interested in the research.

Several years ago Israeli inventor Alon Bodner invented a device that could extract not just oxygen from water, but air that was fully appropriate for breathing. The device was tested in laboratory conditions only; nothing is known about its further tests at ocean’s depths.

US doctor Ronald Hirschel does not overrule the possibility of using coercive circulation (with which he treats lung diseases) for breathing under water. The essence of the method is that they insert tubes in the patient’s trachea whereas the tubes are connected to a pump. But here there is another problem: water that goes through lungs should be disinfected, otherwise it will cause pneumonia.

However, there are people who believe that they can do with special equipment, since the ability to dive deep and stay under the water surface for a long time is a part of human nature. The reflexes are developed very poorly in humans. But if a human being learns to develop them, he or she will learn to dive like dolphins and whales.

“The biggest danger during long breath-holding is the shortage of oxygen in the brain, which leads to the loss of consciousness and death. In mammalorganisms that live in water (whales, dolphins, walruses and seals) there are processes that allow them to adapt to the oxygen shortage and bear great pressure under water. These processes are called diving reflexes of mammals. By the way, the same reflexes were found with pearl divers who are able to dive deep under the water surface and stay there for two-six minutes. Yogis have techniques that let them hold their breath for over half an hour without any baleful consequences. The same techniques are used by free divers.

“If a human being is well trained, if he knows certain techniques, he can learn to hold breath for a long time. The depth of diving and the time, during which divers can hold breath, increase constantly. People beat their own records. It is somehow easier for David Blaine. He dived under water in a glass reservoir and he did not move. There are special techniques of ‘half-inhale-half-exhale’ that help to stay longer under water. If Blaine had a gag in his mouth and a gripe on his nose, he wouldn’t be able to stay without oxygen for such a long time”.

Irina Deneshchuk, a physician:
“Man can stay without oxygen for five minutes at most. It concerns well-trained athletes only. Ordinary man can hold breath for half a minute or a minute, after that he has fits and dies. Breathing can be internal and external. When a person dives, he uses internal breathing. Oxygen gets into lungs, acidifies and turns into carbon dioxide. Since we cannot exhale carbon dioxide and inhale a new portion of oxygen under water, lungs start contracting and a person has fits. Oxygen acidifies at the same speed with every person. This process is inevitable, that’s why man cannot stay under water for over five minutes whatever the size of lungs might be. David Blaine’s stunt is just impossible. It most likely was a trick.”

Slowdown of heart rhythms
Slower contractions of cardiac muscles lower the transfer of oxygen to tissues and hampers metabolism, which allows to use oxygen economically.

This reflex works both with an animal and with a trained human being, as soon as they dive under water.

The change of blood circulation
The pressure of water causes an outflow of blood from limbs and sends blood only to vital organs such as the heart and the brain providing them with oxygen.

Higher level of hemoglobin
The spleen contracts significantly under pressure, which results in an additional production of red corpuscles. It enhances the hemoglobin level, which lets the body accumulate additional oxygen. Scientists determined that Japanese divers could easily use this mechanism in their underwater activities.

Filling lungs
At a depth of over 50 meters alveoli get filled with plasma, which maintains the necessary size of lungs and prevents them from contractions and destruction.