What will the tomb of Jesus Christ reveal to the world?

The Holy Sepulchre Church of the Resurrection in Jerusalem is the tomb that Roman Emperor Constantine's mother Helena discovered in the IV century, scientists concluded having studied the shrine. 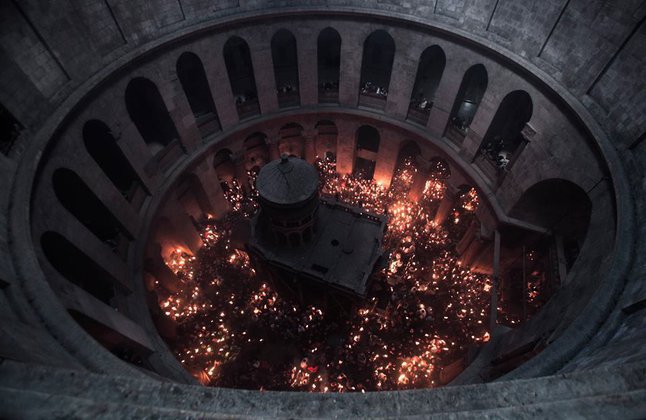 National Geographic has recently reported about the permission that archeologists obtained for the first time in 500 years to remove the marble slab from the site of the alleged burial of Jesus Christ. The slab was used to cover the tomb in 1555 to protect the shrine from those willing to take a particle of relics. Underneath the marble slab, the researchers found another one, with an image of a Christian cross. The scientists assumed that the Holy Sepulchre was identical to the tomb discovered during the rule of Roman Emperor Constantine the Great by his mother Helena, a Christian.

Archaeologist Fredrik Hiebert of National Geographic magazine said that over the centuries the temple was repeatedly exposed to natural disasters (fires and earthquakes) and numerous invasions of barbarians. Fortunately, the sanctuary was left intact. The scientists will have to find out why Helena was engaged in excavations at Golgotha, and why she knew that Jesus Christ was buried there.

Also read: Russia has become the only defender of Christin values

The Holy Sepulchre is the main shrine of Christendom. This is the tomb in the rock, in which, according to the Gospel, Jesus Christ was buried after his crucifixion and where he then resurrected three days afterwards. The tomb is the main altar of the Church of the Resurrection in Jerusalem. According to tradition, the tomb was located outside the city walls, on the north-west of Jerusalem, near Golgotha. At the beginning of the IV century, the Edicule of Holy Sepulchre was built, where  the Holy Fire still lights up. The Edicule is to be repaired for the first time since 1810.

Here is an excerpt written by Eusebius of Caesarea from the history of the Church (Book III, Chapter XXVI):

"This sacred cave, then, certain impious and godless persons had thought to remove entirely from the eyes of men, supposing in their folly that thus they should be able effectually to obscure the truth. Accordingly they brought a quantity of earth from a distance with much labor, and covered the entire spot; then, having raised this to a moderate height, they paved it with stone, concealing the holy cave beneath this massive mound. Then, as though their purpose had been effectually accomplished, they prepare on this foundation a truly dreadful sepulchre of souls, by building a gloomy shrine of lifeless idols to the impure spirit whom they call Venus, and offering detestable oblations therein on profane and accursed altars. For they supposed that their object could not otherwise be fully attained, than by thus burying the sacred cave beneath these foul pollutions."

Also read: Once upon a time, there were Christians in the Middle East

"...As soon as the original surface of the ground, beneath the covering of earth, appeared, immediately and contrary to all expectation, the venerable and hallowed monument of our Savior's resurrection was discovered. Then indeed did this most holy cave present a faithful similitude of his return to life, in that, after lying buried in darkness, it again emerged to light, and afforded to all who came to witness the sight, a clear and visible proof of the wonders of which that spot had once been the scene, a testimony to the resurrection of the Savior clearer than any voice could give".
(Book III, Chapter XXVIII)

Today, the temple of the Holy Sepulchre is a huge architectural complex, including Golgotha and the place of the crucifixion, the Edicule - a chapel in the center of the temple that hides the cave of Sepulchre - the Stone of Unction, the Katholikon, the underground church of the Finding of the Holy Cross, the church of St. Helena and several chapels.

Currently, the temple is divided between six denominations of the Christian Church: Greek Orthodox, Catholic, Armenian, Coptic, Syrian and Ethiopian. Each of these confessions have their own chapels and hours of prayer that largely complicates scientific research.