Europeans want to fly to the Moon together with Russians

After a series of failures, the Russian space industry stands on the brink of new technological breakthroughs in the field of space technology, Deputy Prime Minister Dmitry Rogozin said. According to Rogozin, one of the goals of the Russian space industry today is to build a super-heavy rocket that would ensure the creation of a manned lunar station. 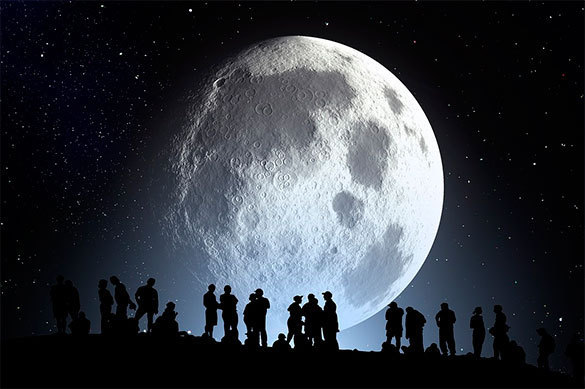 "What kind of breakthrough can the Russian space industry make? Is the lunar base project developing?"

"As for the rocket and the spaceship, there are two big issues about it. If it goes about unmanned exploration of the moon, Luna-25 and Luna-26 stations and so on, then these activities are part of the federal space program before 2025 that should be implemented soon, in 2017 and 2018.

"As for a manned flight to the moon, a breakthrough effort is required indeed, because existing launch vehicles and even launch vehicles of the near future are, unfortunately, unable to deliver Russian cosmonauts to the Moon. We need to develop new launch vehicles for the purpose.

"There is Angara-A5V launcher, for example. This is a heavy carrier rocket with increased lifting capacity. This rocket could make a lunar mission possible, but this work is outside the federal space program, but we have the potential."

"What is the point of building a manned lunar station? What scientific work can be conducted there?"

"First of all, it goes about the exploration of the Moon itself. The lunar exploration of the past - the flights of US astronauts and Soviet spacecraft to the Moon could give us just a glimpse of the Earth's satellite. Not that long ago, scientists discovered large reserves of water in the lunar soil. This is very important, because, if a lunar station is ever built, it will be possible to extract water and produce oxygen and hydrogen from it. Hydrogen would be used as fuel, so this is a direct way to the development of lunar resources.

"The Moon can also be used for various astrophysical experiments, because there is no atmosphere there, and one can install different radio telescopes directly on the surface of the satellite. Cosmonauts would play the role of both scientists and technical operators in this case."

"Does Russia compete or cooperate with other countries for the lunar exploration program?"

"We try to cooperate. There are joint projects of so-called lunar villages that Russia develops with the European Space Agency. The Europeans are extremely interested in taking part in all this, but they do not have plans to build either a rocket or a spaceship to the Moon. They would like to fly there with us."