Schiaparelli lander of the Russian-European ExoMars mission landed on the surface of Mars, but it has not been possible to establish connection with the craft since then. 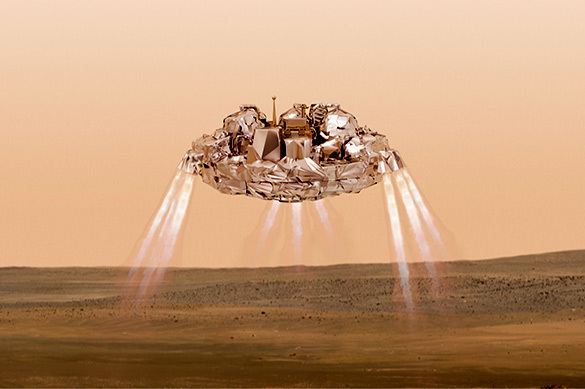 Batteries will maintain the operation of the module from three to ten days, during which it still remains possible to establish connection with the unit, a message from the Russian Space Agency Roscosmos said.

Experts with the European Space Agency (ESA) said that they had received a radio signal from Schiaparelli lander, but the signal was interrupted at the moment when the spacecraft was descending on the Red Planet. For the time being, the ESA has no information about the condition of the lander.

"Are there any chances for the spacecraft to start working again?

"Let's start with most important things. ExoMars-2016 is a long mission that still continues. The stage that is finishing now is a successful one. The spacecraft has reached Mars and separated into two parts. The TGO module remains in orbit with the spacecraft that will continue working for the mission.

"There are two Russian spacecraft there, and one of them - Frend - was studying radiation levels  while the mission was heading to Mars. This information will be extremely important in the future, when cosmonauts and astronauts fly to Mars. Right now, the spacecraft is turned off while the TGO is stabilising its orbit.

"Another Russian spacecraft - ACS - will study the atmosphere of Mars and the levels of methane in it that could potentially indicate the presence of life or its traces. Having found the location with the highest concentration of methane in it, scientists will send another lander to the place within the scope of ExoMars-2020 mission.

"As for Schiaparelli, it has done a lot of what was originally planned. During its six-minute descent into the atmosphere of Mars, the unit studied the aerobraking situation, opened a parachute and dropped the heat shield. ESA and Roscosmos specialists received the telemetry of the landing, which will be used for future ExoMars-2020 missions. During the next mission, a landing platform stuffed with unique scientific equipment and a rover will land on the surface of the Red Planet. The rover will travel on the planet to collect information. The landing platform is being developed by Russian scientists. The platform is equipped with unique scientific instruments, such as drilling equipment. It will be possible to take soil samples from the depth of two meters, which has never been done before. This will let us understand whether there was life on Mars before.

"During the next mission on Mars in 2020, the landing will be conducted solely in the area of responsibility of the Russian side, unlike during ExoMars-2016, when the European Space Agency was fully in charge of the lander. What has happened to Schiaparelli? Most likely, the unit has reached the surface, but there is no connection with the spacecraft. There is still a hope that the spacecraft will respond. Schiaparelli is supposed to send signals to the spacecraft in Mars's orbit first before they transmit signals to Earth. There were incidents before, when spacecraft would land on space bodies of the solar system but then respond only in a while. The most important thing here is the fact that most of the Russian-European ExoMars-2016 mission has been successfully implemented.