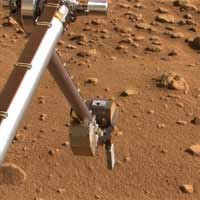 It is not ruled out that NASA experts decided not to unveil the entire truth about the Martian discoveries.

Aviation Week & Space Technology wrote with reference to own anonymous sources at NASA that the agency sent another document to the White House along with the report on the Martian soil analysis. The secret document supposedly says that Phoenix found certain evidence of possible life on the planet.

The classified report does not contain any mentioning of a life form that exists or might have existed on Mars, the weekly magazine wrote. Most likely, it goes about a potential ability of the red planet to maintain the existence of living organisms. It is too early to make such a conclusion about the entire surface of Mars. For the time being, the assumption may be true only with the area, where the rover conducts exploration works.

Several sources from various administrative structures of NASA confirmed the existence of secret information which supplemented the data exposed on July 31. The anonymous sources said that the unexposed data were a lot more provocative than those, which the agency made public.

NASA will make the information public in December of the current year, if the US government issues an approval for it.

The Phoenix mission landed a telerobot in the polar region of Mars on May 25, 2008. One of the mission's two primary objectives is to search for a 'habitable zone' in the Martian regolith where microbial life could exist, the other goal being to study the geological history of water on Mars. The lander has a 2.5 meter robotic arm that is capable of digging a 0.5 meter trench in the regolith. The arm is fitted with an arm camera able to verify that there is material in the scoop when returning samples to the lander for analysis – this overcomes an important design flaw in the Viking landers.

The craft has a mass spectrometer capable of detecting organic volatiles up to 10ppb, an optical microscope and an atomic force microscope. There is an electrochemistry experiment which will tell scientists about ions in the regolith and show the amount and type of antioxidants on Mars, if the device works.

NASA scientist Carol Stoker reports that oxidants on Mars vary with latitude, noting that Viking 2 saw fewer oxidants than Viking 1 because of its more northerly position. Phoenix has landed further north still. Rates of sedimentation at the Phoenix landing site are hoped to allow the probe to sample layers that date back at least 50,000 years, and maybe up to a million years. This is important because the climate of Mars has been much warmer in the past and any life could have been more active and widespread, says Stoker.

Unlike the Mars Pathfinder Sojourner rover and the Mars Exploration Rovers, which used airbag-cushioned capsules to land on Mars, the Phoenix lander landed the same way that the Viking landers did, despite the claims that rocket exhaust may have contaminated the Viking landing sites.