What for is invisible Zumwalt needed?

The global mass media has recently reported that the US new-generation destroyer USS Zumwalt DDG-1000 has bound for its base in San Diego. Official activation ceremony is planned for 15 October. Why is this ship so interesting? And why is so much attention paid to it? Many believe that it is to define look of the XXI century vessels, the main criterion of which will be 'invisibility'. 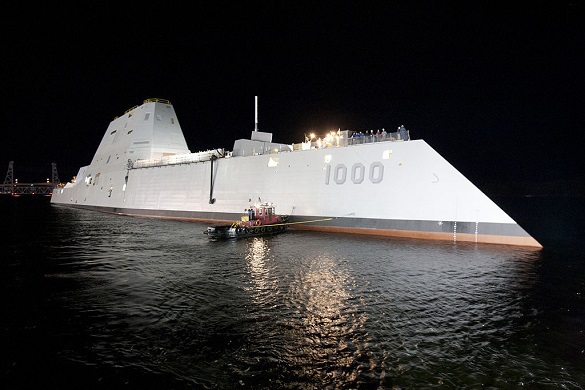 The idea of invisibility has been very popular in fairy tales of various peoples, and has been taken as a fairy tale for a long time, as people simply didn't have corresponding technologies.

But let's look at the Zumwalt. It resembles an iron most of all. And the look is rather strange than threatening. Its developers assert that it's the most modern and advanced ship on planet Earth. Well, it may be, taking into account his cost of 4.4bln dollars.

But what was this money spent for? For the stealth technology, which is capable of decreasing ship's visibility to radars of an enemy. A radar will certainly have a mark of it, but an impressive vessel with displacement of 15,000 tons and the length of 183m will be taken as a small fishing trawler.

The ship has high speed and its crew consists of only 158 members, which evidences its high level of automation. There are two 155-mm long-range cannons, which can strike at 40km with common shells and at 180km with missile accelerators. But they cost very much and they cannot boast of the quantity of explosives as missile fuel takes much space.

Beside that, the ship is equipped with container missile launchers for vertical launch of various types of missiles including surface-to-air and anti-submarine ones. What is most interesting is that there are 80 such launchers on the Zumwalt. But the Ticonderoga cruiser displacement of which is only 9,600 tons, has 124 of them, while the Arleigh Burke destroyer has as many as 96. It means that the new ship is both more expensive and bigger (and more vulnerable as a result), but its equipment is weaker.

Thus, the stake is in 'invisibility', which is secured with special form of the hull and deck erections. They deflect radio waves and do not let an adversary get true information about the ship. Well, the sip will surely be seen from the space in any case, first of all due to foam trail. Propeller noise cannot be concealed either.

Experts say that in a modern battle, such ship as Zumwalt may just run out of ammunition. As in order to repel an attack of aircraft which strike with 40 missiles against it, it will need to spend 80 missiles as a minimum. And what if several attacks are carried out? Of course it may be supported with other ships. But other vessels are not invisible at all. And in case Zumwalt has an escort, all this idea with invisibility is absolutely senseless.

And they plan to build only three samples of such ships, so what for do they need them? Or is it a step to something more advanced?

The Japanese have recently tested an 'invisible coat'. The coat is made on the basis of nanotechnologies. Being put on a man, it 'sees' what is behind the back and transmits the image forward. Thus, the man melts into the background and you cannot see him.

What about covering the ship with this technology? Then it will melt in the ocean and we'll see nothing but a wake and divergent waves. And the radar screens will see quite small and thus not dangerous target.

Such invisible ships may be an ideal weapon to support air landing troops, and it's extremely difficult to strike them from the ground without special guidance systems within infrared and radar radius. Will shipbuilders and military go the length of it in the future or is the stake just in invisibility to radars? Who knows?