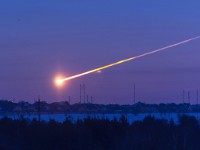 The Chebarkul meteorite, or Chelyabinsk meteorite, that fell on the territory of the city of Chelyabinsk in February 2013, could contain extraterrestrial water in its composition. Such a discovery was made ​​by Stepan Berzin, a scientist with Laboratory of Geology of the Russian Academy of Sciences.

Berzin analyzed the fragments of the meteorite and concluded that the pores of the celestial body contained ice that evaporated only after the space rock entered the atmosphere of planet Earth.

According to the scientist, it was water that could cause the explosion of the meteorite over Chelyabinsk.

This observation may again confirm the theory of extraterrestrial origin of water on our planet, which could be brought to Earth from space.

The meteorite, 17 meters in diameter, fell in Chelyabinsk on February 15, 2013. Many people were injured by pieces of glass from broken windows.