Open letter to governments and diplomats from Japan and Brazil

Today , three years after the collapse of Fukushima, an event that shook the world and is jeopardizing the future of humanity, the Antinuclear Articulation and Coalition for a Brazil Free of Nuclear Plants joins the thousands of people in Japan and several countries, in manifesting rejection of nuclear energy and requiring action to block the release of radioactivity in the damaged Daiichi plant. 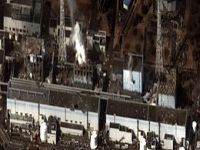 Open letter to governments and diplomats from Japan and Brazil
March 11, 2014, three years after the tragedy of Fukushima

Remember that on September 13 last year, the accident with cesium-137 occurred in Goiania, capital of Goias, Brazil, was 26 years old. The largest urban area in atomic tragedy killed thousands of people. On the same day, 114 Japanese organizations, 107 Brazilian organizations, 32 Alternative Nobel Prizewinners and others addressed the diplomatic corps and government, and issued to the Japanese and Brazilian authorities a declaration condemning nuclear agreement between Brazil/Japan and advocating a treaty for cooperation in the use of renewable energy between the two countries.

The silence of the authorities mentioned above, regarding this initiative did not shake our conviction that dialogue is the best way for the consolidation of peace in the world! For this reason, in the third year of the tragedy of Fukushima, we direct this public letter to the same authorities, alerting, once again, about the damage that Japan has caused to humanity. Many people killed themselves through fear of radiation. Several died during the evacuation of more than 160,000 people who were forced to flee their homes.

Since the media reported last October, the Prime Minister of Japan Shinzo Abe acknowledged the seriousness of the situation, asked for qualified technological assistance worldwide to resolve the impacts of the Fukushima accident, and everywhere the fear for the future of planet increases, for as we all know, nuclear plants are deadly and atomic radiation does not respect borders.

Despite the support of the U.S. and billions of dollars already spent on "decontamination", the failure to prevent the release of radioactivity shows the difficulties of Japanese nuclear technology. Radioactive material continues to flow from power plants to groundwater flowing into the Pacific Ocean. But the government continues exporting this dangerous technology to countries such as India, Turkey and Vietnam, expanding the range of the threat to other people.

It is worrying that the government is supporting secrecy laws that criminalize perpetrators of news about alleged nuclear "secrets". All media from Japan and even the New York Times oppose this repressive legislation, which could turn into a crime the divulgation of information on the insecurity of nuclear technology, radiation leaks and hazards at Japanese nuclear power plants.

Official figures published in late February, recorded 1,656 deaths linked to stress or atomic disaster disease. But the justice ministry has archived law suits against the Japanese government and the leaders of the nuclear power plant, Tokyo Electric Power, made in 2012, by about 15 thousand people who had homes and farms affected by radiation. In the streets, the Japanese protested, demanding punishment for those responsible for damage caused by Fukushima.

We reaffirm our solidarity with the victims of the atomic technology worldwide, and our support for the demands of the Japanese who yearn for immediate compensation for all workers and communities affected by the Fukushima accident, the immediate evacuation of children and communities in the region, by repeal of the law that threatens the freedom and right to information, the closing of nuclear plants and the non-export of this technology to other parts of the planet!