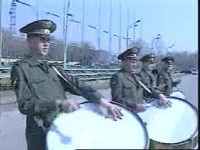 It is generally believed that music, like other forms of art, was born at the dawn of civilization. Musical instruments of the Stone Age period were made from specially processed mammoth bones that produced sound at impact, like bone pipes. It is not surprising that one of the theories says that music emerged as a supplement to dancing, so it was rhythm that originally played the dominant role in music - it helped dancers move in synch with music. Another hypothesis says that music was formed as a form of assistance during work. Here, the main role also belongs to rhythm, for it was easier to make concerted movements.

The linguistic theory of the origin of music, which looks into its relationship with speech intonation, has received broad recognition as well. This theory explains, for example, why the viscous Oriental music is so unlike the upbeat Western music. In traditional Chinese, Thai and Vietnamese music, decreasing and increasing tones are plentiful.

The same can be said of native languages ​​of representatives of these cultures. Both in speech and in music of these peoples, there are not many short melodic intervals - that is they rarely put two consecutive notes next to each other. Intonations of these languages ​​to first-time listeners seem to be "jumping" or "floating". But in Western music, just like in Western languages, there are more short intervals - one or two semitones, that is less than or equal to the major second. The sound pattern of phrases is more even.

Charles Darwin believed that music was a sexual attraction. The rivalry of males for females was conducted at different levels: those who win fights with enemies, who look better and brighter and, of course, those who were more vociferous had the advantage. Psychologist and neuroscientist at the University of Colorado (USA), Chris Loersch, adheres to another hypothesis, which, however, can also be called an "evolutionary" one. He and his colleague Nathan Arbuckle suggested that music was a way to unite our ancestors in a close-knit group.

Arbuckle and Loersch paid attention to the unifying effect of music. Indeed, it can be seen in how a small group of people like to relax together with a guitar, and how crowds of people go to huge arenas and stadiums for music concerts. A song that people listen to and sing along, charges them with the general mood, transforming a bunch of disparate people in a community with a common attitude.

To test their hypothesis, the scientists conducted seven series of experiments, with the participation of 879 students from various countries. The experimenters studied emotional reactions to music and the feeling of involvement in groups of listeners. It was found that those respondents,  whom music influenced most, admitted the need to be recognized as a part of a team more frequently than others.

"At many concerts, there is some feeling of community, there are rules of human interaction - says Loersch. - There are extensive ties being formed between people, everyone around are like family members. People on stage raise their hands up in the air, and people in the audience repeat all that smiling. Just look at their faces - forty thousand people are bound together by music," the scientist said.

Of course, the found correlation is not enough to confirm the theory. Yet, the assumption of Arbuckle and Loersch look truthful. Loersch believes that in such moments, music connects even strangers, thus satisfying their need to belong to social community.

"Our primary motivation in life is to be a good member of this or that group. People feel wonderful throwing off their individuality and becoming a part of a larger whole. If someone does not fulfill their obligations under the "social contract," they get booed and it does not matter how good this musician is."

Moreover, the scientists assumed that listening to music alone is self-deception. In reality, at this moment our thoughts are interacting with other people - with those, who like listening to this music as well, and even with those who perform it. Incidentally, one of the most effective "communicators," according to Loersch, is Stevie Wonder: "I think he's incredibly effective at communicating emotions. He makes you feel what he feels. And he clearly feels a lot."