Your dog can read your mind 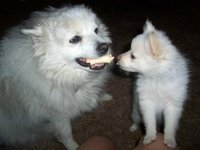 For a long time biologists did not understand one simple thing: how dogs determine who from a group of people are most likely to secretly throw them delicious pieces under the table? Now, it seems that the answer is found: these animals are able to read human facial expressions.

A team from the University of Florida noticed that dogs that have more contact with people are much more aware of verbal and nonverbal cues. There is a simple explanation - watching people, dogs have learned to read their gestures. This is why dogs behave well in front of us, but as soon as we look away, they become mischievous.

The study's author Monique Udell conducted two experiments to compare the behavior of domestic dogs, shelter dogs and wolves soliciting food. In the first case the animals were dealing with an attentive person, in the second - with a person who did not see them.

Monique, in particular, was interested in finding out how the environment where the "subjects" were raised affects their ability to beg. In the first experiment, the wolves, as well as pet dogs, show successes communicating with an attentive person. This suggests that both domestic and wild animals change their behavior depending on the degree of human sensitivity. At the same time both types showed the results improving each time.

At the same time, paradoxically, the dogs did not respond to the visual cues given to them by a person intending to share a treat with them. However, this only applies to shelter dogs: house dogs perfectly mastered the art of begging, and the art of reading people's intentions.

The results of the experiments proved that dogs follow the subtle hints that a person gives them, even if unconsciously. The combination of certain gestures and previously obtained experience helps a dog understand that a person is going to give it a treat.

It is interesting that American scientists have not figured out all the details of the mechanism of interactions between humans and dogs. Russian scientists have deciphered it long time ago. Back in the 1990s, I was able to talk on this interesting subject with a great zoologist and specialist in animal behavior Konstantin Panyutin. He described the results he obtained that would be summarized in an article. However, unfortunately, he did not have time to write it.

Also read: Dogs and cats: Eat them or pet them?

Konstantin believed that many scientists have underestimated the ability of wolves and dogs to see and interpret facial expressions of the human face. For a long time it was considered that mimicry in the communication of wolves does not play such a large role as in communication of primates. This is explained by the fact that the facial muscles attached to the front side of the skull of these animals developed quite poorly. In addition, for a long time scientists simply could not see facial mimicry in dogs and wolfs as their expressions change very rapidly, within milliseconds. The biologists were able to trace these emotions only recently, with the advance of contemporary photo and video equipment.

Panyutin, studying pictures of wolves' muzzles and the results of his own visual observations, concluded that the mimicry in these animals is very well developed. He cited an example of a situation where two strange dogs meet and for a while just stand across each other, doing nothing. A layman looking at their noses would not see any of the facial muscles moving and would come to the conclusion that the animals do not communicate with each other. However, an attentive biologist, (or a person with a sensitive video camera) would understand that in those few seconds dogs, with the help of their facial muscles, had a lot to tell each other. The information would include social status, their rights to the territory and the agreement to separate amicably.

Accordingly, Konstantin suggested that if dogs and wolves "communicate" through the facial muscles, then in their interaction with humans they will also look at the functioning of the facial muscles, trying to figure out what we want to "tell" them. They notice the most delicate and subtle movements of mimic muscles, even those that people are unable to catch. He conducted several experiments trying to talk to wolves and dogs in the "language" of facial muscles (which he thoroughly studied), and found that animals understand him literally at a glance.

It turns out that all dogs can read human faces even better than humans read each other's. Interestingly, another scientist Jason Badridze who studied the behavior of wolves his entire life and even lived in a wolf pack, irrespective of Panyutin came to the same conclusions. Mimicry plays an important role in the communication of wolves, and people could easily learn the language and use it to communicate with animals. It is not ruled out many dog ​​breeders and circus trainers intuitively understand it because they often have to deal with such things in their work.

If people can learn wolves' and dog's mimics, why are these animals incapable of doing the same thing about the human "language of emotions"? These animals are very observant and have a great memory. Most likely those dogs who live with people for a long time understand people using the "language" of facial muscles.

Most likely, dogs looking at human faces can guess whether they will be getting a treat. The facial muscles often give out our intentions and desires, whether we like it or not. It is very difficult to control the work of these extensive muscles, and no one would control their facial expression every second.

It is not hard for dogs to decipher humans. Due to the fact that these animals have a good memory, they quickly learn the "language" of human facial expressions, becoming aware of our mood.