Activists rescued 500 dogs that would become food in China 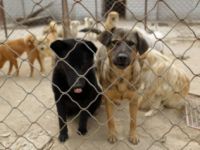 A truck intercepted carrying the dogs shows the strength of the movement for animals in the country...dogs rescued were treated at the headquarters of the animal protection association

Activists rescued about 500 dogs destined to become food in China, in a case that shows the growth of the animal rights movement in the country. Volunteers intercepted a truck carrying the animals in Beijing and bought the truck containing the dogs for $18,000 (£29,000) after a raid involving the police.

Crowded into cages, the animals were being taken to Northeast China to be sold to restaurants.

Some of the rescued dogs were sick. Jammed very tight together in the truck, they had scratched and bitten each other. In addition, several had parvovirus, a potentially fatal virus that attacks the intestines and the hearts of the canines.

The action, done at a toll booth last April 15, lasted 15 hours. Finally, in an act of desperation, the activists used their own money to buy the dogs from the driver. The police who appeared at the site claimed that they could do nothing to intervene, since the truck was not violating any law.

Dog meat has been consumed for many centuries in China, where many people believe it has medicinal properties.

The activists decided to intervene when they received information that a shipment of dogs was passing through Beijing.

When he learned of the case, the volunteer, Wang Qi, who works for the Small Animal Protection Association of China, published information through social networks to attract people to stop the truck.

"I sent the message and then ran to the scene. People began to get there an hour later. In total, there were almost 300 people," Wang said.

Accompanied by volunteers, some animals were taken to more than 20 veterinary hospitals, while others were taken to recover at the association's headquarters.

Information about the rescue quickly spread, with hundreds of volunteers and animal lovers visiting the site in the days that followed.

At the headquarters of the association, a retired 80 year old man and his daughter appeared with a car full of dog food to donate to the charity.

"I had heard of the organization, but I've never been here before. I thought I'd come and do my best," said the daughter.

Other people were touched by the drama of redemption and the poor condition of many of the dogs that were recovering.

"I brought a little food, I feel very bad," related Qi Jing, without hiding his tears.

This episode shows how a growing number of Chinese now see cats and dogs more as pets, and less as a source of protein.

The founder of the Small Animal Protection Association, Lu Di - who lives with about a hundred cats and dogs - said that Chinese law does not protect the pets properly, necessitating ordinary citizens to defend them on their own initiative.