Mega-geomagnetic storm: The end of the Internet?

A gigantic solar storm has started as the eleven-year solar flare peak, known as the solar maximum, nears. Scientists fear that the result could be a repeat of the massive radiation storm which physically burnt out telegraph cables in the nineteenth century. Could this spell the end of the Internet in the near future? 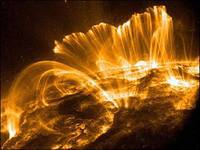 For now, the activity is reduced to growing solar flares, which have begun to build up, the first stage of a new wave of solar storms, which run in eleven-year cycles, the last peak being registered in the year 2000.

It is not hearsay, but a fact, that solar radiation can affect short-wave communications, disrupting satellite transmissions and disturbing cell phone, GPS, TV and radio reception, even electricity flow along power lines. The 2003 flare was massive. It was the largest recorded since October 1989, caused by an explosion in the magnetic field which gathers above a sunspot.

There was major concern at the time for the crew of the International Space Station, as it passed through the worst part of the radiation storm and the control center ordered them to sleep in a compartment away from their normal sleeping quarters.

New Scientist magazine then quoted leading specialists who claimed that this was the largest solar flare in decades and confirmed that turbulence from the gigantic explosion on the solar surface could disrupt communications, as it was hurled into space from the outermost layer of the solar atmosphere, called the corona.

Now scientists confirm the Sun has again started emitting gigantic flares, as the 2011/2012 solar maximum begins. Particle clouds several times the size of planet Earth blast outwards at over one million miles per hour and slam into the Earth's magnetosphere.

Yet what is happening today is only the beginning of a new cycle of solar activity, which peaks every 11 years. As far back as 2006, scientists were already predicting the new wave of activity, claiming that "Navigation, power and communications systems that rely on GPS satellite navigation will be disrupted by violent solar activity in 2011, research shows. A study reveals Global Positioning System receivers to be unexpectedly vulnerable to bursts of radio noise produced by solar flares, created by explosions in the Sun's atmosphere" (New Scientist, September 29, 2006).

The peak is expected through 2011 and 2012 and scientists have confirmed that it could widely disrupt aviation and emergency systems, since aircraft use GPS signals for ATC (Air Traffic Control).