Victims of the darkness: Government surveillance and intimidation

“As nightfall does not come at once, neither does oppression. In both instances there is a twilight where everything remains seemingly unchanged, and it is in such a twilight that we must be aware of the change in the air, however slight, lest we become unwitting victims of the darkness.” Supreme Court Justice William O. Douglas 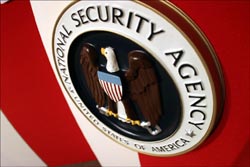 Not since the notorious McCarthy era of the 1950s, when American freedoms faced extinction, has there been such an attack against the Bill of Rights. The recent media focus on President Bush's authorizing the National Security Agency to spy on ordinary Americans has brought this issue to the forefront. On secret orders from President Bush, the NSA has been monitoring the international phone calls and emails of Americans without warrants.

Moreover, the Bush Administration has consistently harassed citizens who exercise their First Amendment freedoms and voice concerns about government policies. The main weapon used in this war is intimidation, specifically through governmental surveillance and government agents.

Indeed, the American government has a near paranoia about dissenting citizens. “The Administration and campaign of George W. Bush,” writes former Congressman Bob Barr (R-Ga.), “is squelching any possible hint of disagreement or protest at every political rally or gathering.” For example, in March of this year, three citizens were removed from President Bush's town hall meeting in Aurora, Colo., because the car they arrived in featured the bumper sticker, “No More Blood for Oil.”

This past summer, FBI agents went to Windsor, Conn., with a document marked for delivery by hand. On Matianuk Avenue, across from the tennis courts, two special agents found their man. They gave George Christian the letter, which warned him to tell no one - ever - what it said. The letter, which was on FBI stationery, directed Christian to surrender “all subscriber information, billing information and access logs of any person” who used a specific computer at a library branch some distance away.

Christian, who manages digital records for three dozen Connecticut libraries, said in an affidavit that he configures his system for privacy. But the vendors of the software Christian operates said their databases can reveal the websites that visitors browse, the e-mail accounts they open and the books they borrow. Christian refused to hand over the records, and his employer, Library Connection, Inc., filed suit for the right to protest the FBI demand in public.

This case affords a rare glimpse of an exponentially growing practice of domestic surveillance under some of the heinous provisions of the USA Patriot Act. National security letters, such as the one issued to George Christian, were created in the 1970s for espionage and terrorism investigations.

They were originally intended as narrow exceptions in consumer privacy law, enabling the FBI to review in secret the customer records of suspected foreign agents. However, the Patriot Act and Bush Administration guidelines for its use have transformed those letters by permitting clandestine scrutiny of U. S. residents and visitors who are not alleged to be terrorists or spies.

“The FBI now issues more than 30,000 national security letters a year,” writes Barton Gellman in The Washington Post, “a hundredfold increase over historic norms. The letters - one of which can be used to sweep up the records of many people - are extending the bureau's reach as never before into the telephone calls, correspondence and financial lives of ordinary Americans.” Indeed, according to a previously classified document released recently, the FBI has conducted clandestine surveillance on some U. S. residents for as long as 18 months at a time without proper paperwork or oversight.

Thus, the government does not limit its attacks to actual terrorists. Ordinary American citizens are the focus as well. Take the case of Selena Jarvis, a social studies teacher at Currituck County High School in North Carolina. She assigned her senior civics and economics class to use photographs to illustrate their freedoms as found in the Bill of Rights. One student photographed a picture of George W. Bush next to his own hand in a thumbs-down position as a way to express his freedom to dissent.

However, while developing the student's photographs, a Wal-Mart photo department employee, in obvious need ofsome education on the Bill of Rights, called the police. They then contacted the Secret Service. But rather than dismissing the case, the Secret Service decided to investigate the matter. The agents interrogated the student and questioned Jarvis. While questioning Jarvis, an agent asked her if she thought the photo was suspicious. Dumbfounded, Jarvis responded, “No, it was a Bill of Rights project!” Jarvis was startled at the claim that the student was a terrorist and called the whole thing “ridiculous.”

Why would the Secret Service, which is not run by incompetent individuals, take the time to investigate a high school student and his class project? It is safe to assume that the Secret Service knew thestudent was not a terrorist and wanted to make an example of him for others who might be bold enough to use their right to dissent. After the ordeal, Selena Jarvis commented, “I blame Wal-Mart more than anybody. I was really disgusted with them. But everyone was using poor judgment, from Wal-Mart up to the Secret Service.”

Unfortunately, this is not the only “ridiculous” case of individuals tattling on their neighbors. For example, Barry Reingold was questioned by the FBI after he criticized the war in Afghanistan in the locker room of his local health club. In another case, Derek Kjar's neighbors reported his bumper sticker of George Bush wearing a crown with the heading “King George – off with his head.” As a result, Kjar was interrogated by the Secret Service. In both instances, close contacts of the two men reported them to the authorities.

And as if things weren't bad enough, the military is now spying on us. A secret database obtained by NBC News recently reveals that the Department of Defense and the Pentagon have also increased intelligence collection on American citizens inside the country. This includes monitoring peaceful anti-war groups and protests and involves video taping, monitoring the Internet and collecting the name of anyone critical of the government.

There is even a toll-free number for anyone interested to report on fellow Americans to the military. And the spying even includes religious groups such as those attending the Quaker Meeting House in Lake Worth, Florida. “On a domestic level, this is unprecedented,” says NBC News analyst William Arkin. “I think it is the beginning of enormous problems and enormous mischief for the military.”

Since 9/11, it has been consistently drummed into our heads by the government, with all its alerts and multi-colored alarms, that terrorists are everywhere and even your next door neighbor could be one. As a result, the government's promotion of fear and paranoia has moved us closer to an Orwellian state where citizens inform on one another. The result is that the citizens often do the job of the police and no longer use good judgment before reporting their neighbors. In the process, such informing citizens are doing away with their own freedoms.

These tactics are not new to the world. The Nazi and Soviet secret police of former regimes were infamous for such tactics. The police controlled the people through fear, and the subsequent result was a totalitarian state. They turned their respective population into a society of informers.

Aleksandr Solzhenitsyn, the Nobel Peace Prize-winning author and former Soviet dissident, once spoke of how fear destroys the will of the people. He noted how the Russian people would kneel inside the doors of their apartments, pressing their ears to listen when the KGB came at midnight to arrest a neighbor who had spoken out against the government. Solzhenitsyn said that if all the people would have come out and driven off the secret police, sheer public opinion would have demoralized the effort to subdue a free people. But fear and paranoia kept the people at bay.

We should not be afraid of government agents, whether employed by the FBI, the military or local authorities. Their salaries are paid through our tax dollars. Supposedly, they are our servants. Truly free societies do not function that way. Our fear of government servants is a clear indication of ominous things to come. If citizens are too frightened to use their freedoms, then those freedoms will become extinct. And the darkness will be complete.