Containing Russia: Back to the Future? (Part II) 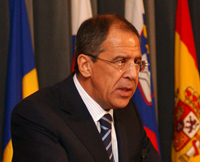 Containing Russia: Back to the Future? (Part II)

The Limits Of Force

In the twenty-first century, delay in solving accumulated problems carries devastating consequences for all nations. One sure lesson is that unilateral responses, consisting primarily of using force, result in stalemates and broken china everywhere. The current catalog of unresolved crises – Iraq, Iran, Lebanon, Darfur, North Korea – is a testament to that. Genuine security will only be achieved through establishing normal relations and engaging in dialogue. German Foreign Minister Frank-Walter Steinmeier hit the right note when he counseled that today's world should be based on cooperation rather than military deterrence.

Complex problems require comprehensive approaches. In the case of Iran, resolving differences should lie in the normalization by all countries of their relations with Tehran. Normalization would also help preserve the nuclear nonproliferation regime. Regarding Kosovo, independence from Serbia would create a precedent that goes beyond the existing norms of international law. Our partners' inclination to give way to the blackmail of violence and anarchy within Kosovo contrasts with the indifference shown to similar violence and anarchy in the Palestinian territories, where it has been tolerated for decades while a Palestinian state has yet to be established.

Eliminating the Cold War legacy in Europe, where the containment policy was dominant for too long, is especially pressing. Creating division in Europe encourages nationalist sentiments that threaten the unity of the continent. The current problems faced by the European Union, in particular, and European politics, in general, cannot be solved without Europe's maintaining constructive and future-oriented relations with Russia – relations based on mutual trust and confidence. This ought to be seen as serving U.S. interests as well.

Instead, various attempts are being made to contain Russia, including through the eastward expansion of the North Atlantic Treaty Organization in violation of previous assurances given to Moscow. Today, supporters of NATO enlargement harp on the organization's supposed role in the promotion of democracy. How is democracy furthered by a military-political alliance that is producing scenarios for the use of force?

Meanwhile, some are promoting the extension of NATO membership to the countries that comprise the Commonwealth of Independent States (CIS) as some sort of pass providing admittance to the club of democratic states whether these countries meet the democratic test or not. One cannot help wondering whether this initiative is being pursued for the sake of moral satisfaction or again to contain Russia.

As far as the CIS is concerned, Russia has the capacity to maintain social, economic, and other forms of stability in the region. Moscow’s rejection of politicized trade and economic relations and its adoption of market-based principles testifies to its determination to have normalcy in interstate relations. Russia and the West can cooperate in this region but only by forsaking zero-sum power games.

President Putin’s offer to allow joint usage of the Gabala radar base in Azerbaijan, instead of those eastern European installations – as well as his proposal, made when meeting with President George W.Bush in Kennebunkport, Maine, in July, to create a regional monitoring and early warning system – provides a brilliant opportunity to find a way out of the present situation with the dignity of all parties intact. As a starting point for a truly collective effort in this area, Russia is willing to take part, together with the United States and others, in a joint analysis of potential missile threats up to the year 2020.

The desire to contain Russia clearly manifests itself as well in the situation surrounding the 1990 Treaty on Conventional Armed Forces in Europe (or CFE Treaty). Russia complies with the treaty in good faith and insists only on the one thing that the treaty promises: equal security.

However, the equal security principle was compromised with the dissolution of the Warsaw Pact; meanwhile, NATO was left intact and then enlarged. In the meantime, attempts to correct the situation have come up against the refusal of NATO member countries to ratify the modernization of the treaty under various unrelated pretexts that have no legal justification and are entirely political. The lesson to be drawn from the CFE Treaty stalemate is that any element of global or European security architecture that is not based on the principles of equality and mutual benefit will not prove to be sustainable.

After all, if we cannot adapt this old instrument to the new realities, is it not time to review the situation and start developing a new system of arms control and confidence-building measures, if we find that Europe needs one? Here again, frank discussion at Kennebunkport gave hope that there is way to move toward putting into force the adapted treaty.

Beyond The Cold War

It is time to bury the Cold War legacy and establish structures that meet the imperatives of this era – particularly since Russia and the West are no longer adversaries and do not wish to create the impression that war is still a possibility in Europe. The path to trust lies through candid dialogue and reasoned debate, as well as interactions based on the joint analysis of threats. At the moment, however, without reasonable grounds, Russia is excluded from such joint analysis. Instead, it is urged to believe in the analytic abilities and good intentions of its partners.

Russians do not suffer from a sense of exceptionalism, but neither do they consider their analytic abilities and ideas inferior to those of others. Russia will respond to safeguard its national security, and in doing so will be guided by the principle of "reasonable sufficiency." Meanwhile, it will always keep the door open for positive joint action to safeguard common interests on the basis of equality. This is the only serious approach to national security concerns.

In his speech in Munich, President Putin invited all of Russia’s partners to start a serious and substantive discussion of the current status of international affairs, which is far from satisfactory. Russia is convinced that a friend/enemy attitude toward it should be a thing of the past. If efforts are being undertaken to "counter Russia’s negative behavior," how can Russia be expected to cooperate in areas of interest to its partners? One has to choose between containment and cooperation. This is relevant to Russia's accession to the World Trade Organization and the Asian Development Bank and to the unwarranted continuance of the 1970s Jackson-Vanik amendment, which denies Russia permanent normal trading relations with the United States.

U.S.-Russian relations still enjoy the stabilizing benefits of a close and honest working relationship between President Putin and President Bush. Both countries and both peoples share the memory of their joint victory over fascism and their joint exit from the Cold War, which unites them in its own right. Should equal partnership prevail in U.S.-Russian relations, very little will be impossible for the two nations to achieve. The challenges are many – the struggle against international terrorism; organized crime and drug trafficking; the search for realistic climate protection; the development of nuclear energy while strengthening nonproliferation efforts; the pursuit of global energy security; and the exploration of outer space. Practical cooperation on these and other challenges should not be sacrificed on the altar of renewed containment.

At present, anti-Americanism is not as widespread in Russia as it is elsewhere. But a return to containment, and the bloc-based thinking that accompanies it, could trigger mutual alienation between Americans and Russians. The strains evident in the U.S.-Russian relationship call for a high-level working group charged with finding ways to further cooperation. The presidents of Russia and the United States support the idea of such a group, headed by the former statesmen Henry Kissinger and Yevgeny Primakov.

Both sides should demonstrate a broad-minded and unbiased vision, one that represents Russia and the United States as two branches of European civilization. Russia, the United States, and the European Union should work together to preserve the integrity of the Euro-Atlantic space in global politics. For as Jacques Delors has said, whenever this troika "is divided by differences, whenever each party plays its own game, the risk of global instability greatly increases."

So why not stand together and act in the spirit of cooperation and fair competition on the basis of shared standards and a respect for international law? At the Kennebunkport meeting in July, President Putin and President Bush demonstrated what teamwork can achieve. They agreed to look for common approaches to missile defense and strategic arms reductions, and they launched new initiatives on nuclear energy and nonproliferation. Russia and the United States have nothing to divide them; along with other partners, they share responsibility for the future of the world. It is not Russia that needs to be contained; it is those who would deprive the world of the benefits that will come from a strong U.S.-Russian partnership.