Ariel Sharon too weak to win his last battle

Time is taking its toll

This time the most glorious general of the Israeli army is fighting the enemy he can not beat. One thing looks clear-cut at the moment: no matter when Sharon's last battle is going to end, arguably the most prominent figure at today's political scene in the Middle East has exited the building. There are no more politicians of this caliber left in the region since the strong leaders like Yasser Arafat, King Hussein of Jordan, and the Syrian president Hafez al-Assad have made their exit prior to Sharon. 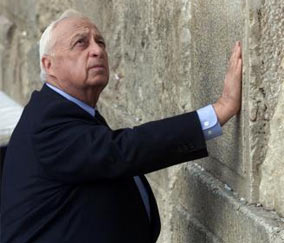 Shimon Peres is the last man standing among Israel's generation of political mastodons who founded and fought for the Jewish state. Time is taking its toll.

Ariel Sharon was born in Palestine in 1928. In his youth he joined the movement fighting for  establishment of a Jewish state. He took part in every war fought by Israel. He commanded an infantry company in the 1948 War of Independence. In 1953 he founded and led the “101” special unit which carried out retaliatory operations against Palestinian fedayeen. Later Sharon was appointed commander of the 202 Paratroop Brigade, the first unit of the kind in the Israeli army. According to Haim Herzog, the head of Israeli military intelligence at the time, “Colonel Sharon was a personality of legendary standing in the armed forces. He was a bulky man looking like a cutthroat; he would reject any criticism or objection. Sharon was an extremely independent and imperious person who could stand his ground. He reminded me of Patton, the U.S. general with manners of a musketeer.” He led a brigade during the Sinai Campaign in 1956. The tank division under his command obliterated several Egyptian units during the 1967 Six Day War.

Ariel Sharon was recalled to active military service in the 1973 Yom Kippur War. His tank division played a crucial role in the campaign by crossing the Suez Canal into the Egyptian territory while the Egyptian army was positioned on the eastern side of the canal, the Israeli soil. As a result, the Egyptians were cut off the rear and almost surrounded by the Israelis. The United States and USSR had to urgently intervene to save Egypt from capitulation.

It was Sharon's finest hour. It is worthy of note that prior to Sharon's crossing the canal, his superiors wanted to remove him from duties for three times for disobeying the orders of the commander of the front. Sharon was ordered to refrain from taking the offensive. On the contrary, he launched attacks. The Defense Minister Moshe Dayan never approved his dismissal. Sharon enjoyed immense authority in the army. Soldiers chalked “Arik Sharon is the king of Israel” on the sides of their tanks rolling home after the war.

Sharon co-founded the Likud bloc in 1973. As the Defense Minister in 1982, he talked Prime Minister Menachem Begin into invading Lebanon for destroying PLO's armed groups headed by Yasser Arafat. In keeping with his reputation, Sharon not only defeated the Palestinians, he also occupied half of Lebanon. Following the massacre in Sabra and Shatila refugee camps where thousands of Palestinians refugees were slain by Lebanese Phalangists, Sharon was dismissed from his post.

While serving as Minister of Agriculture, and then as Minister of Construction and Housing, Sharon was actively pursuing a policy of building new Israeli settlements on the occupied Palestinian territories. However, his political career seemed to have stalemated. But everything changed in September 1999 after he was elected Chairman of the Likud. In September 2000, Sharon took another extraordinary step and visited the Temple Mount in Jerusalem. Apart from being the holiest place in Judaism, the Temple Mount also has two mosques considered holy by Muslims. In fact, Jews are not banned from visiting the place. However, due to Sharon's reputation among the Palestinians, the visit triggered off a huge eruption of indignation eventually tuning into an unprecedented wave of violence and terror or intifadaagainst the Israelis. The events did not prevent Sharon from being elected Prime Minister in a special election held in February 2001. He also won the elections in 2003.

One can recall the events that have taken place over the last few years. Sharon steadfastly refused to acknowledge Yasser Arafat as a legitimate negotiator for talks on peace settlement; Arafat was actually remained under the house arrest in Ramallah up until his death in 2004; Israelis aircraft delivering pinpoint air strikes on the leaders of Palestinian terrorist organizations in retaliation to suicide bombings in Israel; the construction of a 'wall' or a security fence between Israel and the West Bank. The Israeli government formally agreed to follow the principles of the road map for peace with the Palestinians, a peace settlement plan involving the creation of two states on the land of a ‘historical Palestine' yet the actual policies remained virtually unchanged aiming to prevent a Palestinian state from becoming a reality within the 1967 borders and Jerusalem as its capital. Israelis plainly refused to discuss a possibility for withdrawals from the West Bank or return of the Palestinian refugees to Israel.

Ariel Sharon has never accepted the basic concepts underlying the Oslo agreements reached in the early 1990s.On the other hand, the Palestinians can not accept the concept of a Palestinian state, which Sharon had to reluctantly agree upon following U.S. pressure. In the end Sharon realized that his country could not go on living in a perpetual state of war and terror. But what was his long-term strategic plan? Alas, we will never know about that. Assumedly, he was going to pursue the carrot and stick policy in order to show the Palestinians that their armed struggle could bear no fruit. He actually gave a carrot to the Palestinians as he made the decision about the withdrawal of Israeli troops and settlers from the Gaza Strip, a move devoid of any coordination with the Palestinian leadership. Showing his trademark enthusiasm, Sharon set about the implementation of the disengagement plan that was eventually viewed as a success by most of the Israeli public although at the beginning it sparked bitter protests from nearly half of Israel's Jewish population.

Sharon sacrificed a smaller part of the occupied territories to solidify Israel's grip on a bigger part of them i.e. the West Bank. Sharon could have never had any plans for dismantling the largest and most important settlements in the West Bank. However, both the settlers and leading figures of his political party harbored suspicions as to Sharon's intentions to carry out fresh withdrawals. Having grown tired of fighting the opponents in his party, he took another unexpected turn and left the party he founded himself back in 1973. Sharon formally resigned from Likud Party to form a new centrist party “Kadima” in November last year. He brought over many of the prominent Likud members with him. Besides, he secured support of Shimon Peres, his longstanding political opponent who also happens to be Sharon’s personal friend.

Judging by the opinion polls, Kadima had good chances of winning the elections to the Knesset, which are scheduled to take place on March 28. The new party could have won 40 seats; the number would have been big enough for getting a majority in the Knesset by forming unions with smaller parties. But prospects are in disarray these days. Prime Ministerial duties have been turned over to Ehud Olmert, Sharon's close and loyal comrade in arms. However, Olmert is not a “man of the party.” He is a good administrator, held the posts of Mayor of Jerusalem and Finance Minister. At the same time, he lacks the qualities of a charismatic public politician. He does not enjoy great popularity with the Israeli people and political elite. Some other politician may become the leader of Kadima and a new prime minister.