Condoleezza Rice wants Russia to obey her every single word

If Russia wants to be respected in the Group of Eight, the Russian administration needs to listen to what Ms. Rice is saying

Condoleezza Rice, the US Secretary of State, has won the respectable reputation of an iron lady in world politics. The literal translation of this expression has settled down in the Russian language as well. However, Russian people usually associate Ms. Rice with a different type of woman, which translates into English as 'virago.' Condoleezza Rice does not think twice to start a vigorous fight against all manifestations of evil and injustice, which she may notice in the world. 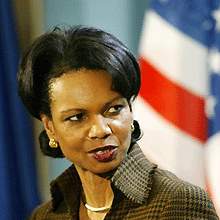 Ms. Rice has recently paid special attention to the natural gas conflict between Russia and Ukraine. The criticism from the US top official followed shortly after Russia and Ukraine signed an agreement regulating prices on natural gas and its transit via Ukraine's territory. The agreement put an end to the gas dispute. Apparently, it was not the end which Ms. Rice wanted to see. The Secretary of State did not hesitate to start another fight of hers to defend the “victim of gas blackmail” – Ukraine – and show the “blackmailer” – Russia – its place.

Having a breakfast with reporters one fine morning, Condi criticized Russia for using its fuel resources as a political weapon. According to Rice, Russia's attempt to cut gas supplies to Ukraine was a certain punishment for the “orange revolution” and the pro-Western stance of the Ukrainian President Viktor Yushchenko.

Condoleezza Rice did not try to mask her irritation about the fact that Russia dared to use its right and raise prices on fuel. "It was not a good week from the point of view of Russia's demonstrating that it is now prepared to act ... as an energy supplier in a responsible way," Rice told reporters. "When you say you want to be a part of the international economy and you want to be a responsible actor in the international economy, then you play by its rules. I think that kind of behavior is going to continue to draw comment about the distance between Russian behavior and something like this and what would be expected of a responsible member of the G-8," Rice said.

As a matter of fact, the US Secretary of State repeated, albeit in a more politically correct way, the scandalous statement from Ukraine's Deputy Foreign Affairs Minister, Anton Buteiko. The Ukrainian official called Russia's Gazprom a “smuggler and robber” only one day before the Russian gas monopolist signed the above-mentioned agreement with Ukraine's Naftogaz. Most likely, Rice did not have a wish to look into the matter of the gas dispute between Russia and Ukraine. Moreover, Ms. Rice virtually ignored Ukraine's confession to committing illegal activities during the transit of Russia's gas export to Europe. It is not ruled out that the US administration was not aware of that at all.

Brushing all ethical issues aside, one may say that Condoleezza Rice had a specific scenario of the Russia-Ukraine gas dispute, in which Russia was marked as “a bad guy.” Since Ukraine was a “good guy” in the standoff, the US Secretary of State was supposed to morally support Ukraine and shake her fist at Russia. In other words, if Russia wants to be respected in the Group of Eight, the Russian administration needs to listen to what Ms. Rice is saying.

Beingoutspoken is very typical of Ms. Rice. Many remember her instructions to George W. Bush regarding USA's attitude to those countries which did not support the anti-Iraqi coalition. “We need to ignore Germany, punish France and forgive Russia,” she once said.

Condoleezza Rice's straightforward approach to solving complicated geopolitical issues eventually aggravated the crisis between the USA and Old Europe. The consequences of Rice's interference in the economic conflict between Russia and Ukraine are still to come. Condoleezza Rice's uncouth and thoughtless remarks can be compared to a sincere, albeit a totally unprofessional strip-show.

Until recently it was believed that the US Secretary of State is a champion of freedom, democracy and market economy in the whole world. It turns out now that Condoleezza Rice believes that the transparent scheme of relations between Russia and Ukraine in the gas field exposes Russia as an unreliable fuel supplier. Moreover, Ms. Rice believes that the introduction of market prices on natural gas is a gradual and slow process for the two countries.

Very interesting, isn't it? The Ukrainian Prime Minister has recently assured his nation that the USA was ready to recognize Ukraine a country with market economy in January of 2006. Maybe Ms. Rice wanted to make Ukraine understand that it was too early for the country to be rewarded with the long-expected status? It is not ruled out that the US Secretary of State intends to use the policy of double standards with Ukraine: to acknowledge the existence of the market economy there and forbid market prices on gas for Russia?

The mother of all iron ladies, Margaret Thatcher, was a family woman. Politics and nothing but politics has become the family life of Condoleezza Rice. Who on Earth will agree to build a relationship with a woman, who is ready to stand up and fight at any moment? Ms. Rice looks good for her profession indeed, but she has already celebrated her 50th birthday. Lonely women usually become resentful and unrestrained at this age.

Vladimir Zhirinovsky, a notorious Russian politician, the leader of the Liberal and Democratic Party of Russia (LDPR) gave Pravda.Ru the following comments regarding Ms. Rice's statement on the gas dispute between Russia and Ukraine.

“Condoleezza Rice is a very cruel, offended woman who lacks men's attention. She needs to be taken to a company of soldiers and it would be just fine. Releasing such stupid remarks gives her the feeling of being fulfilled. This is the only way for her to attract men's attention. The States needs to practice the old Soviet tradition when both single women and single men were not allowed to take responsible state positions,” Zhirinovsky said.