The recent visit of the Indian Prime Minister Manmohan Singh to Russia has proved it again that Moscow officials do have good skills in finding political and economic allies. It is difficult to say which of the two states – Russia or India – is more interested in cooperation. It is not really important to know the answer for this question, taking into consideration the fact that there are too many fields, which Russia and India can gain mutual profit from. 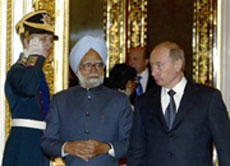 India, the economic rise of which has been gaining five percent for several years already, is in dire need of energy carriers first and foremost. India supposedly purchases 70 percent of the consumed oil abroad. Needless to say that Russia may come in handy for India at this point.

In addition, India is very interested in Russian arms. It is noteworthy that the two countries have finished the purchase-and-sale period in their relations. The current level of bilateral ties between the two countries allows them to think about launching joint projects in the defense field. The development of a new pursuit plane of the fifth generation could be a good example of such intentions.

As for India acquiring Russian weapons, one should mention something about two other largest purchasers of Russian defense technologies: China and Iran (the latter has been gradually increasing its orders with the Russian defense complex). Both Chinese, Russian and Indian officials have recently acknowledged that the three countries were very close to achieving the genuine strategic partnership. A lot of specialists, however, said that China and India would never be able to avoid bitter rivalries in their aspiration to accomplish regional and global leadership.

Russia and India have been taking efforts to attract Iran in the large-scale Eurasian partnership. One can see Russian and Indian officials defending Tehran's interests on the international political arena, especially when it comes to the current debate of the Iranian nuclear program. President Putin and Indian Prime Minister Singh touched upon this subject during their recent talks in Moscow. There is every reason to believe that the two leaders have confirmed their intentions to stand up for Tehran's right to work on its nuclear projects if they are based on peaceful initiatives, of course.

Russia expects a lot from its Indian partners. It may seem surprising, but India, in which 25 percent of its billion-strong population live below the poverty line, can become a very good investor for the Russian economy.

It goes without saying that Russia and India will continue running a close political cooperation too. The Indian prime minister said during a press conference in Moscow that there was practically no international issue left in the world, which could be solved without Russia's participation in it.