UN concerned over investigation of Andijan uprising in Uzbekistan

Fifteen men were accused and convicted of crimes in the city of Andijan in May, 2005, where shocking acts of hooliganism, public disorder, criminal damage and violence were perpetrated by a band of disorderly thugs and bandits. Now the UN Commissioner for Human Rights, Louise Arbour, expresses concern that the trial was beset by irregularities. 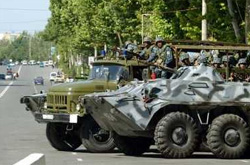 Claiming that little evidence “apart from confessions” were presented during the trial, one ponders the question what more evidence does she want? If the accused confessed to being guilty as the prosecution had stated, it is a good indication that they are either guilty or plain mad.

Louise Arbour further claims that the defense lawyers were not adequate for the job – but these were all people with law degrees. How could they not be adequate? The fact is that the Uzbek authorities have voluntarily adhered to international standards on free and fair trials, that qualified lawyers were appointed to defend those accused, who openly admitted their guilt.

How much more interference is there to be in the internal and sovereign affairs of CIS states? If this agency is so worried about human rights violations, why the absence of activity in Iraq, where US forces have slaughtered tens of thousands of innocent civilians in an illegal war based on lies and in which acts of mass murder and torture have been perpetrated?

It is strange how invisible certain actions can become while others which do not exist are seen. When someone does not see something that exists it is one thing, but to see what does not exist is more complicated.