Japan has a lot of other questions to dwell upon at the moment: the relations with China and the two Koreas, the legacy of WWII

Vladimir Putin arrived in Japan with an official visit on Sunday. The Russian president's last visit to the Japanese capital took place five years ago: the visit to Japan has been repeatedly delayed since 2000 on account of Japan's intention to discuss the problem of South Kurile Islands, although Russia strongly refused to negotiate on the matter. 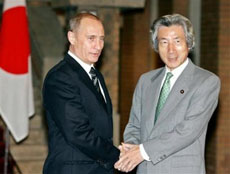 Putin's latest visit to Japan has not brought any progress in the regulation of the long-standing “Kurile conflict” between the two countries, although it was not a formal courtesy visit of the Russian president either. Russia and Japan agreed upon Russia's membership in the World Trade Organization, about gas deliveries and about simplification of visa rules.

The question of visas is highly important for millions of citizens living in Russia's Eastern Siberia and Far East. Russian and Japanese officials agreed to consider the issue of simplifying visa rules for those partaking in business, cultural, scientific, sports and other programs. The new agreement on visas is supposed to become the first step in attracting Japanese tourists to Russia – the Japanese are known for their addiction to traveling all over the world.

Economic cooperation between Russia and Japan became the central subject of the talks. “Japan is highly interested in Russian energy carriers. Various projects in the oil and gas industry may help Japan solve its energy problem,” deputy director of the Moscow-based center for political technologies, Boris Makarenko, told Pravda.Ru.

Many Japanese citizens took to the streets on the day of Vladimir Putin's arrival in Japan, trying to make Russia return four of the claimed Kurile Islands to Japan. The demonstrators were rather expressive with their protests: the police even had to protect the front entrance to the building of the Russian embassy.

As soon as Russian President Vladimir Putin and Japanese Prime Minister Junichiro Koizumi appeared at a press conference after the completion of official negotiations, the first question from reporters touched upon the most problematic question in Russian-Japanese relations. “We will do our best to solve the problem. This is what I came here for, and this will be the goal of Mr. Koizumi's forthcoming visit to Moscow,” the Russian leader said.

”The absence of peace treaty between Russia and Japan is definitely an obstacle: Japanese companies are used to working under guarantees provided by other states. However, this is not the problem that cannot be solved,” Boris Makarenko said.

As for the question of Kurile Islands, this is not the most important problem that the Japanese administration has to deal with now. Japan has a lot of other questions to dwell upon at the moment: the relations with China and the two Koreas, the legacy of WWII. It may only seem that the attention of the Japanese administration is entirely concentrated on the territorial problem of the Kurile Islands, one of which is just a stone desert. Japan is much more interested in the perspective to receive oil and gas from Russia, for instance.