Official reports say life is getting back to normal in Chechnya. A rock festival dubbed Phoenix was finally held in the town of Gudermes

A group of Russian correspondents went to Chechnya and tried to locate any other signs of peaceful life aside from the rock festival and an aquatic recreation center which is still under construction. 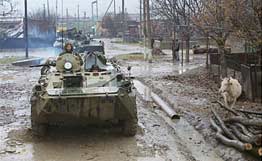 Cars bound for the Chechen capital Grozny roll along the broken roads at an average speed of 180 km per hour. It is thought that a fast ride can keep you alive if your vehicle runs over the road mine. Columns of armoured trucks and wagons are the only vehicles that move slowly in Chechnya. Speaking of the Chechen province in terms of a typical landscape, it seems pretty similar to that somewhere in the central part of Russia. You can see plenty of old tidy houses with green gate, or lines of brand-new red brick buildings. It is hard to estimate the poverty level of the local population as you count the satellite dishes. Military equipment on the road is the only reminder of the antiterrorist operation area you happen to explore. Military armored trains crawling from Grozny to Mozdok remind you of time and place too. Servicemen guard trains of Chechen oil in tanks and escort cargo platforms. They also clear railway tracks of mines.

“Are you nuts?” was the only question from the military after we told them that we were going to visit the central market in Grozny. “Don't you worry, the market is fine,” said our Chechen friends. But they also said that “you guys will be fine if you stick together and look after yourselves over there.”

One can find the abundance of fruit and vegetables at the central market. Prices were high.

Local dealers in street-corner hard currency exchange operations say that it is easy to find anything on the market, be it hashish or a TT pistol. Rolex priced at 170 rubles ($6) took my fancy. No sooner had I asked in Russian “How much?” than the whole marketplace grew silent. I think I heard a typical clangor as if somebody has jerked the breech lock. Salesmen were sizing us up. Then we saw a group of young men move in our direction. Their submachine guns were bulging out from their jackets. So we ran away. We did not want to join those 116 people who were kidnapped in Chechnya last month, according to Russian human rights activists. Official sources say 113 people went missing in Chechnya since the beginning of 2005.

“Just a handful of Russians ever paid a visit to our central market. Even soldiers with their Kalashnikovs keep away from it. But now things are a bit quieter, no kidding. And I remember all that mess four years ago. My cameraman refused to step outside with his camera if no armed guard was provided,” says Nura, a colleague from a Chechen TV station.

We heard gunshots out in the streets as we were talking in Nura's office. The traffic police near Minutka Square told us that a wedding ceremony was in full swing nearby. “We are trying to curtail this unseemly tradition,” a young policeman called Aslan said.

Chechen traffic police believe that members of other security forces units are a real threat. “Other security forces” normally mean soldiers from the Antiterrorist Center run by Chechen leader Ramzan Kadyrov. Below is a couple of daily police reports (abridged):

"On September 10, 2005, one serviceman of the Russian army and two members of the Antiterrorist Center were killed during an exchange of fire between servicemen and members of the above center. The incident took place in the Botlikh region."

Ordinary Chechens pay little attention to scuffles between different branches of security forces. Housing and employment are their biggest concerns. “You won't buy anything for 350,000 rubles, a compensation for damaged residence, a house cost $150,000, labor is even more expensive than construction materials,” complains Zima, an apartment owner in an apartment building in Gudermes. The apartment building was damaged during air raids.

Her apartment has plastic windows, and an old piano covering a hole in the wall. Zima has not paid her electricity bills for nearly 10 years. Water stopped running at about the same time.

Today's Chechnya is made of contrasts. Some people (the majority of them) still live in miserable conditions while others own mansions like some Russian nouveaux riches. We took a look around the house of one “new Chechen.” His garage could easily house a helicopter. Social stratification breeds hate in the impoverished population with regard to the authorities. High unemployment levels (up to 80% of all population) only make things worse.

The army of the unemployed is a round-the-clock recruitment center for Chechen terrorists. They say extremists pay from $50 to $500 to a person who can blow up a Russian army vehicle and videotape the attack.

Practically all residentsof Grozny, the Chechen capital, claim that you can not get more or less prestigious job without paying a bribe up front. By “prestigious job” they mean a position that allows you to carry a gun and an ID in a red jacket with a small Russian flag on the front cover. Even a supervisor at a bakery who has the little red book would have the following line printed in small fonts inside the magic document: “All security agencies are kindly requested to assist the bearer of this ID.”