The gas pipeline known as Blue Stream, an ambitious, highly expensive and complicated project, which created a direct gas link between Russia and Turkey avoiding the territory of other states, was officially opened yesterday. President Putin, Italian Prime Minister Berlusconi and the head of the Turkish government, Recep Tayyip Erdogan, gathered for the official meeting in the town of Samsun, Turkey, to celebrate the launching of the grand project. 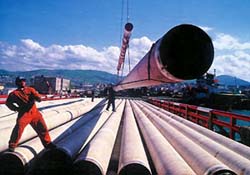 Blue Stream has marked a new era in the construction of pipelines to transport the Russian natural gas directly to foreign consumers. Russia has recently started the construction of another pipeline, which will let Russia deliver its gas to Europe avoiding the territory of the three Baltic States. The pipeline will deliver gas to Great Britain too – the market, which Russia could not access before.

The implementation of the Blue Stream project started on December 15, 1997 when the governments of Russia and Turkey signed an adequate agreement. One may say that Blue Stream has been functioning since 2003, albeit at reduced capacity. The pipeline will deliver 4.5 billion cubic meters of natural gas by the end of the current year; the transportation capacity will be increased to 16 billion cubic meters a year in the future. Blue Stream's length totals 1,213 kilometers – 400 kilometers of pipes have been laid on the Black Sea floor, which made the project become the world's deepest undersea pipeline.

Blue Stream is abundant with innovative technological solutions. However, the project was predicted to fade during the first stage of its implementation, for it touched upon too many interests during construction.

Turkey was doing its best to become one of the regional centers in the beginning of the 1990s. In addition, the Turkish government was interested in exporting natural gas to Europe, particularly to Greece, Bulgaria, Italy and to Balkan states. Turkey was offered three variants to satisfy the nation's needs in gas by the end of the 20th century. The American variant stipulated gas deliveries from the republic of Turkmenistan along the Trans-Caspian pipeline via the territory of Georgia, Azerbaijan and the Black Sea. Natural gas could also be delivered to Turkey through the Russian-Italian Blue Stream project, and from Iran.

Russia's primary goals, which included the country's access to new European markets, were added with new objectives: to secure its interests against the background of unpredictable behaviour of its neighbours. The Russian natural gas is basically transported abroad via the territory of Ukraine. Russia had to pay transit expenses to Ukraine and suffer considerable losses of the raw material during the transportation process. President Putin had to decline his diplomatic manners when he recommended the Ukrainian government not to steal gas from Russia.

Iran's interestsare rather understandable too: this country is rich with gas, which makes the gas export one of the most important factors in the economy of Iran. The USA openly dislikes the Blue Stream project: the US administration funded trans-Caspian projects of oil and gas transportation from former USSR's Caucasus and Central Asia to Turkey, passing Russia by.

The Caspian region has already won the reputation of the zone of USA's strategic interests. The region contains up to 32 billion barrels of crude, which is almost 1.5 times as much as the USA's natural crude reserves. Therefore, the US administration tries to do everything possible to speed up the construction of the Trans-Caspian gas system. As usual, American officials are ready to disregard not quite democratic traditions of certain countries involved in the project.

The Pentagon has announced its military initiative “The Caspian Defense,” which was supposedly created within the scope of the pipeline's construction. The Pentagon plans to set up a network of special police units in Caspian states to protect the gas pipeline against possible threats or attacks.

It goes without saying that the Turkish market has its limits. The USA tried to turn Turkey towards the Trans-Caspian gas project and say no to all other options. The Turkish government eventually made quite a pragmatic decision.

The length of the Blue Stream project is 600 shorter in comparison with the Trans-Caspian pipeline, which therefore implied a cheaper price. In addition, the natural gas from Russia is purer than the one from Turkmenistan. These two factors determined the priorities of the Turkish authorities at this point.

Russia can now celebrate both economic, geopolitical and technical victory. American officials were trying to defame Blue Stream, saying that it was a highly expensive and technologically complicated project, which Russia would not be able to handle. Time has proved the opposite, though: the project was completed as scheduled, albeit with Italy's assistance.

Russia should not delude itself too early, though. The current agreements between Russia and Turkey could have been a lot more impressive. In addition, Turkey convinced Russia of the need to reduce prices on gas by nine percent, but the subject of price reduction continues to appear on the agenda of Russian-Turkish talks. To crown it all, the construction of the Blue Stream project was blackened with corruption reports. Hermitage Capital Management investment fund said that one kilometer of the Russian leg of Blue Stream cost $2.95 million, whereas Turkey needed only $1.35 million for the same amount. Five managers of the Turkish company BOTAS, which participated in the project, were convicted of corruption.

The project has been launched successfully, though, despite all problems. Russia currently considers a possibility to extend the pipeline towards Israel, which will open Mideastern markets to Russia.