The Pentagon acknowledged that US forces used phosphorous-containing weapons in Iraq. An official spokesman for the US Defense Department, Lieutenant Colonel Barry Venable, stated that phosphorous shells were used as incendiary weapons against the armed enemy in the Iraqi town of Fallujah, but not against civilians. The shells, Venable specified, were used to create the smoke screen first and foremost, and to identify targets to drive insurgents out of their holes and destroy them. Specialists of the Iraqi Ministry for Human Rights are currently investigating the statement from the US official. 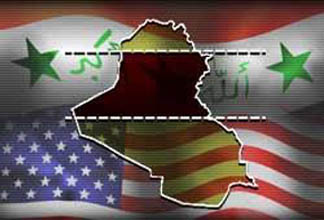 Mr. Venable reminded that white phosphorous shells were not categorized as internationally banned chemical weapons. They are to be referred to as conventional weapons that are legally allowed for use against the live force of an enemy, Venable believes.

The British Department for Defense immediately supported their colleague from the Pentagon. A British official stated yesterday that weapons containing white phosphorous are absolutely legal if they are used on the territory on which no civilians are staying. Indeed, this formulation can be found in the protocol to the 1980 Convention of Certain Conventional Weapons. However, the USA did not sign that document.

White phosphorous blazes up when exposed to air: the poisonous substance produces the burning at extremely high temperatures, which eats soft tissues through and chars bones.

Almost all civilians (about 300,000 people) fled from US bombs from the Sunni town of Fallujah, Iraq, a year ago. Those who survived the bombings were telling horrible stories about their relatives and neghbours burning alive. Eyewitnesses of the US-led raids said that “fire was burning skin and meat to the bones.” The horrifying evidence was documented in a film made by Italian TV channel RAI-3, which was broadcast November 8.

It goes without saying that the US State Department hurried to deny the alleged use of phosphorous weapons in the Iraqi town. However, the above-mentioned statement from the Pentagon put the US diplomatic mission in a very awkward situation. The latter took urgent measures to find a way out: US officials called upon the Iraqi authorities to investigate the fact of tortures that were allegedly applied against Iraqi prisoners. US servicemen found 173 Iraqi prisoners in central Baghdad last Sunday. Hussein Kamal, Deputy Internal Affairs Minister of Iraq, said that all of the found prisoners were in need of urgent medical aid. “Some of them were paralyzed, others had no skin on various parts of their bodies,” the official said. The majority of the injured prisoners were Sunnis that had been tortured by Shiites. The leading Sunni Islamic Party of Iraq required the establishment of the international group to investigate the atrocity.

In the meantime, the Bush's administration has to deal with more and more criticism because of the situation in Iraq. The US Senate passed a resolution yesterday, which obliged Bush to present a report about the current affairs in Iraq every three months. The scandal about CIA's secret prisons for terrorist suspects in other countries is gathering steam as well. The European Union, which refused to send its observers to forthcoming parliamentary elections in Iraq (scheduled for December 15) for safety reasons, promised to apply severe penalties against its members and candidates if it turns out that they rendered territories for CIA's secret prisons (Poland and Romania are suspected).

”At first US forces torture Iraqis and then they look for someone who tortures them too. As a result, it goes about the formation of grounds to accuse the USA of committing crimes against humanity. As for Iraq, it is getting harder and harder for Bush to find excuses: Iraq becomes the second Vietnam for the USA,” the president of the Russian-Arab Dialogue scientific center, professor Anatoly Yegorin said.