There is at least one day in a year, when President Putin acts as the Russian Supreme Commander-in-Chief. Putin demonstrated the qualities of the top defense official yesterday during his speech at the Defense Ministry. It seems that Russia will have to deal with the problem of another potential enemy in the nearest future. 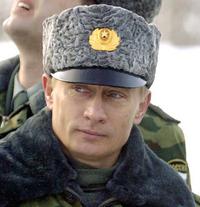 Putin particularly said that Russian Armed Forces should be trained and prepared to guarantee global stability and defend Russia against any attempts of military and political pressure and blackmail. “Unfortunately, one can see such political methods in today's foreign policies run by certain countries,” Putin said.

Russian Minister for Defense, Sergei Ivanov, expanded on Putin's remark and said that the use of military force had already become a continuing trend in world politics. The minister stated that the variety of threats to international and national security was growing in the world. However, Ivanov did not highlight the threat of international terrorism, like he traditionally did before. “Russia should not only strike blows against terrorists, but take other preventive measures not to let various threats appear before there is a need to take extreme actions to neutralize those threats,” the Russian Defense Minister said.

Specialists believe that the Russian administration tends to support its diplomatic decisions with certain military actions in this or that problematic region. These may include military exercises, test launches of missiles or redeployment of troops. In other words, Putin believes that it is about time Russia should show its muscles when there is a need for it.

The USA has been using this preventive strategy in the world for years already. One may thus infer from the above-mentioned statements from the president and the defense minister that Russia may decline the current “no-enemy-concept,” which is has been practicing in its foreign and home policies during the recent years. The enemy has not been specified as such yet, but it is obvious that the Russian administration realizes the imminent danger as the enemy is trying to put political and military pressure upon Russia.

Most likely, the Russian Armed Forces will now be following this new vision of the new enemy. One may come to such a conclusion from the analysis of two basic documents, which are said to shape up the Russian army and navy during the forthcoming several years. It goes about two programs: the development of the armed forces and army equipment for 2006-2015. The development of strategic nuclear forces has become the first priority of the new defense programs. This is a new aspect for Russia, which comes in combination with the improvement of air and space defense.

Once the country has the reliable nuclear defense, it will be possible to continue to optimize the national defense structure. President Putin has recently confirmed that the term of army service in Russia will be cut to one year instead of the current two years in 2008. Furthermore, Defense Minister Sergei Ivanov said that the Armed Forces would be reduced to 1 million 100 thousand servicemen.

The Russian administration plans to follow the USA's example: to establish regional military headquarters and abolish the system of military districts.

In 2006 Russia plans to purchase weapons and equipment in the sum which will be 1.5 times larger than the one used for the same purpose in the previous year. The promises look rather modest in virtual numbers, though: six intercontinental ballistic missiles, 12 booster rockets, 31 T-90 tanks, nine airplanes and eight helicopters. One has to acknowledge that Russia could do a lot better at this point taking into consideration the annual arms sales profit (five billion dollars).

The head of the Russian General Staff, Yury Baluyevsky, told the president during the recent meeting at the Defense Ministry that it would not be possible for the Russian army to obtain all necessary equipment by 2011 due to the absence of precise defense politics in Russia. Commander-in-Chief Vladimir Putin promised to think over the problem with the government and settle all questions on the matter.